I advice to study along with your Bible 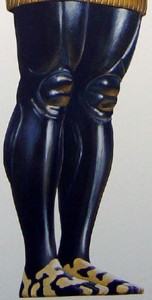 By revelation we understand that there were ten toes of clay and ten toes of Iron. The scripture in Dan 2:41-43 tells us that the feet and toes are made made up of partly of iron and partly of clay, meaning that both are present in mixed proportions and so that is how we have ten toes made up of partly iron and partly clay. In order words ten toes of iron and ten toes of clay. Verse 2 helps us to understand that this kingdom shall be partly broken and partly strong and verse 43 refers to the clay as the seed of men mingled with iron and they will not cleave together just as Communist countries antagonise Capitalism.

Revelation 13:1-2
[1]And I stood upon the sand of the sea, and saw a beast rise up out of the sea, having seven heads and ten horns, and upon his horns ten crowns, and upon his heads the name of blasphemy.
[2]And the beast which I saw was like unto a leopard, and his feet were as the feet of a bear, and his mouth as the mouth of a lion: and the dragon gave him his power, and his seat, and great authority.

John saw the beast arise out of the sea, beasts in bible symbology represent kingdoms as we find in the book of Daniel and multitude of waters symbolises people. The beast was having seven heads meaning the old world empires being restored into a new revolutionary empire and ten horns which are ten kings or powers which shall give their power and strength to the Antichrist government. The beast had a mouth as a lion(the old Babylonian empire), like a leopard(ancient Grecian empire) and the feet of a bear (ancient Mede-Persia empire). It says finally the dragon(Satan) gave him his seat, power and authority.

In other words in modern day territory, those regions include the Middle east, East and western Europe, Russia and includes the continent of Africa. All these territories will come under the rulership of the Antichrist.

Kindly, log on to our home page for the part 1 and Part 2of this series and lots more.
http ://www.endtimehub.blogspot.com

BRO JOEL for ETD!!!
at October 22, 2016
Email ThisBlogThis!Share to TwitterShare to FacebookShare to Pinterest