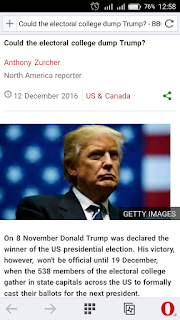 On 8 November Donald Trump was declared the winner of the US presidential election. His victory, however, won't be official until 19 December, when the 538 members of the electoral college gather in state capitals across the US to formally cast their ballots for the next president.

The electoral college vote is a vestigial constitutional organ - a political appendix - that in practice has amounted to little more than a rubber stamp for the president-elect. The year 2016 seems determined to continue breaking rules and norms right up until its last day, however, so of course there's now a movement among some electors to challenge this status quo - and the Clinton team just gave a wink and a nod of approval to their efforts.

On Monday John Podesta, the chair of the Clinton campaign, issued a statement saying that they supported a request by 10 electoral college voters - nine Democrats and one Republican - to receive a briefing from Director of National Intelligence James Clapper on evidence that the Russian government meddled in the US presidential election.
"The bipartisan electors' letter raises very grave issues involving our national security," Podesta, himself a victim of the alleged Russian hacking,
writes . "Electors have a solemn responsibility under the Constitution, and we support their efforts to have their questions addressed."

Those electors are part of a manoeuvre they say was endorsed by founding father Alexander Hamilton, who wrote that a core purpose of the electoral college was to serve as a constitutional failsafe to prevent unqualified candidates or those under the influence of "foreign powers" from becoming president.
As justification for their request they point to the revelation last Friday that the US intelligence community has evidence that Russian hackers specifically targeted communications by Democratic Party and Clinton campaign officials in an attempt to aid Mr Trump's election.
"Trump's willingness to disregard conclusions made by the intelligence community and his continuing defence of Russia and Russian President Vladimir Putin demand close scrutiny and deliberation from the electoral college," the 10 electors write in an open letter to Mr Clapper.
Any hope of swaying enough electors to hand the presidency to Mrs Clinton or a more moderate Republican (Ohio Governor John Kasich, for example) is the longest of long-shots. Although one Republican from Texas, Chris Suprun, has said he won't vote for Mr Trump, another 36 would have to break ranks to drop the Republican below the 270-vote threshold necessary for victory.
That isn't happening, writes the Atlantic's Garrett Epps.
"I don't think the Founding Fathers somehow 'intended' the electors to function in this situation as wise elders," he writes . "If they did, I think the electoral college would operate far differently. The electors never meet, they don't debate, they vote only once, and they disappear. To me, that's not a deliberative body; that's a protection for states that choose to disfranchise their people."

Complicating matters further is the fact 29 states have laws that require presidential electors to support the candidate who wins a plurality of votes in their state. Two Democratic electors in Colorado are challenging the legality of those laws in court - a move that's being opposed by the Trump campaign.
The lawsuit "threatens to undermine the many laws in other states that sensibly bind their electors' votes to represent the will of the citizens, undermining the electoral college in the process", writes a Trump campaign lawyer in a request to participate in the Colorado case.

That is a measured response compared to what is likely to come from Mr Trump himself, once he offers his inevitable counterpunch on Twitter. He's already likened the allegations of Russian electoral meddling to a conspiracy theory and has said that the push for vote recounts in three key swing states to find evidence of tampering, which the Clinton campaign also is supporting, is a scam and a waste of time and money.
Beneath all of this sound and fury is the reality that Mr Trump enters the White House with very tenuous claims to a presidential mandate. He trails Mrs Clinton in the popular vote by 2.8 million votes, his Electoral College margin is modest by historical standards, and he has some of the lowest approval ratings of any president-elect.
Mr Trump and his team have clearly decided that any investigations into whether there were foreign attempts to meddle with the election, either through the ballot box or via email hacking, must be aggressively challenged no matter how unlikely they are to succeed.

With Podesta's move, the Democrats open themselves up to charges that they're sore losers - and with only a week before the electoral college votes, any efforts to block Mr Trump's path to the presidency are almost certainly hopeless.
They could prompt an overreaction from Mr Trump and his team, however, and set them at odds with Republicans in Congress who have called for a closer look into Russia's activities.
Anything that knocks the president-elect off his stride and foments dissent in Republican ranks could be viewed by Democrats as a win, and at this point they'll likely take whatever they can get. 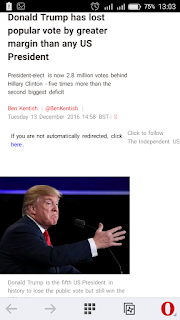 Donald Trump lost the popular vote in last month’s US presidential election by a bigger margin than any other US president in history.
The Republican is currently trailing Democrat rival Hillary Clinton by 2.8 million votes as the last remaining postal ballots are counted – despite him winning the November 8 election because of the Electoral College system.

That deficit is more than five times bigger than the 544,000 by which George W. Bush lost to Al Gore in 2000 - the second biggest popular vote deficit in history for a candidate who has still gone on to become President.
Only five US presidents in history have been elected despite losing the popular vote: John Quincy Adams in 1824, Rutherford Hayes in 1876, Benjamin Harrison in 1888, George W. Bush in 2000 and Donald Trump this November.

When the United States Electoral College casts their electoral votes in December 2016, it will most likely elect Donald Trump as president, pursuant to the popular vote in each electors' respective state. On that basis, Trump is expected to receive more than the required 270 electoral college votes required to become president. As of December 9, 2016, Hillary Clinton had nonetheless received 2.84 million more votes in the general election than Trump, giving Clinton a 2.09% popular vote lead over Trump.

One scenario in which Trump might not become president involves the electoral college. As originally set up, the electoral college was intended to debate and vote on the candidates; the general election merely decided who the electors would be. As of November 2016, 29 states and the District of Columbia legally require their electors to vote according to the popular vote in their state, but other states still allow their electors to vote against their state's popular vote (earning such electors the label " faithless electors "). A scenario where Clinton wins is not impossible but is very unlikely because about 37 Republican electors would have to vote against their party's candidate and their respective state's plurality vote.

December 13, 2016
States must make final decisions in any controversies over the appointment of their electors at least six days before the meeting of the Electors. This is so their electoral votes will be presumed valid when presented to Congress.
Decisions by states’ courts are conclusive, if decided under laws enacted before Election Day.

December 28, 2016
Electoral votes (the Certificates of Vote) must be received by the President of the Senate and the Archivist no later than nine days after the meeting of the electors. States face no legal penalty for failure to comply.
If votes are lost or delayed, the Archivist may take extraordinary measures to retrieve duplicate originals.

On or Before January 3, 2017
The Archivist and/or representatives from the Office of the Federal Register meet with the Secretary of the Senate and the Clerk of the House in late December or early January. This is, in part, a ceremonial occasion. Informal meetings may take place earlier.

January 20, 2017 at Noon—Inauguration Day
The President-elect takes the Oath of Office and becomes the President of the United States.

Watch out for our next news analysis 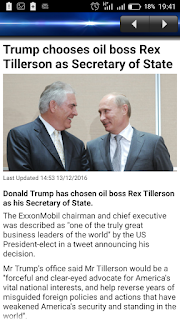 ExxonMobil Chairman and Chief Executive,  Rex Tillerson as Secretary of State - What's it's the significance as to the Rising of the Antichrist?

Log on to our home page for our previous end Time News Analysis
www.endtimehub.blogspot.com


DOMINALTI for CHRIST
On behalf of End Time Hub!!!
at December 14, 2016
Email ThisBlogThis!Share to TwitterShare to FacebookShare to Pinterest