THE CASTING OF SATAN INTO THE BOTTOMLESS PIT BEFORE THE MILLENNIUM 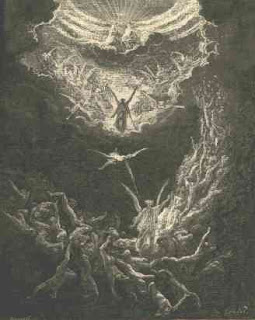 Revelation 20:1-9
[1]And I saw an angel come down from heaven, having the key of the bottomless pit and a great chain in his hand.
[2]And he laid hold on the dragon, that old serpent, which is the Devil, and Satan, and bound him a thousand years,
[3]And cast him into the bottomless pit, and shut him up, and set a seal upon him, that he should deceive the nations no more, till the thousand years should be fulfilled: and after that he must be loosed a little season.
[4]And I saw thrones, and they sat upon them, and judgment was given unto them: and I saw the souls of them that were beheaded for the witness of Jesus, and for the word of God, and which had not worshipped the beast, neither his image, neither had received his mark upon their foreheads, or in their hands; and they lived and reigned with Christ a thousand years.
[5]But the rest of the dead lived not again until the thousand years were finished. This is the first resurrection.
[6]Blessed and holy is he that hath part in the first resurrection: on such the second death hath no power, but they shall be priests of God and of Christ, and shall reign with him a thousand years.
[7]And when the thousand years are expired, Satan shall be loosed out of his prison,
[8]And shall go out to deceive the nations which are in the four quarters of the earth, Gog and Magog, to gather them together to battle: the number of whom is as the sand of the sea.
[9]And they went up on the breadth of the earth, and compassed the camp of the saints about, and the beloved city: and fire came down from God out of heaven, and devoured them.

This Scripture above will be our anchor for the post Millennium Series before we go into the white throne Judgement series. Now, I will like to explain this scriptures in accordance with the end time table as listed in our previous article, Introduction to Post Millennium Series

Firstly, It should be understood that immediately after the Armageddon war the antichrist (beast) and his false prophet would have been cast alive into the lake of fire (the final destination of Satan, his angels, the serpent seeds and the unbelivers). I will not like to go into this topics for now. Stay tune till we shall teach on the Antichrist, the false prophet, Serpent seed, etc....

Revelation 19:20
[20]And the beast was taken, and with him the false prophet that wrought miracles before him, with which he deceived them that had received the mark of the beast, and them that worshipped his image. These both were cast alive into a lake of fire burning with brimstone.

Now back to our anchor scripture at the top, I will like to explain each verse briefly, and verse 1-3a will take us back to Pre-Millennium, because the event revealed here has to take place just before the Millennium immediately after the end of Armageddon war.

Verse 1 - 2
[1]And I saw an angel come down from heaven, having the key of the bottomless pit and a great chain in his hand.
[2]And he laid hold on the dragon, that old serpent, which is the Devil, and Satan, and bound him a thousand years,

The Question to ask now is that What's the personality of the angel that come down from heaven having the key of bottomless pit and could laid hold on Satan just like that and bound him up for thousands years?
For us to understand the personality of this angel, we have to look at other scriptures for us to have the true revelation..

Revelation 1:18
[18]I am he that liveth, and was dead; and, behold, I am alive for evermore, Amen; and have the keys of hell and of death.

Revelation 9:1
[1]And the fifth angel sounded, and I saw a star fall from heaven unto the earth: and to him was given the key of the bottomless pit.

Revelation 12:7-9
[7]And there was war in heaven: Michael and his angels fought against the dragon; and the dragon fought and his angels,
[8]And prevailed not; neither was their place found any more in heaven.
[9]And the great dragon was cast out, that old serpent, called the Devil, and Satan, which deceiveth the whole world: he was cast out into the earth, and his angels were cast out with him.

Jude 1:9: Yet Michael the archangel, when contending with the devil he disputed about the body of Moses, durst not bring against him a railing accusation, but said, The Lord rebuke thee.

Daniel 10:13: But the prince of the kingdom of Persia withstood me one and twenty days: but, lo, Michael, one of the chief princes, came to help me; and I remained there with the kings of Persia.

Daniel 10:21: But I will shew thee that which is noted in the scripture of truth: and there is none that holdeth with me in these things, but Michael your prince.

In the light of the scriptures above, it is clear that the personality of this angel can agree to none but Jesus Christ: it is He who hath the keys to and power of hell and death; it is He that have the superior power over the satan and it is he who alone is stronger than the devil and not any other angel, if we compare this with other scriptures above, then we will see that there is a connection between Michael and Jesus Christ... It's a Mystery, who is this Michael?  Does it means Archangel Michael is the Lord Jesus Christ Himself in Angelic form? I don't want to go deeper than this. Search it out.

Verse 3
[3]a And cast him into the bottomless pit, and shut him up, and set a seal upon him, that he should deceive the nations no more, till the thousand years should be fulfilled:

Now, immediately the Antichrist and his false prophet has been cast alive into the lake of fire, the dragon (which is Satan and the Devil) will not be cast to the lake of fire, but into the bottomless pit. He will be cast there for a thousand year, so the Devil will be in the bottomless pit, during the 1000 Millennium Reign of Christ, so the devil won't be able to deceive any nation during the millennium. But, we shall soon see that he will be release again.

We continue on the Post Millennium series in our next topic...

DOMINALTI for CHRIST
On Behalf of End Time Hub!!!
at January 18, 2017
Email ThisBlogThis!Share to TwitterShare to FacebookShare to Pinterest