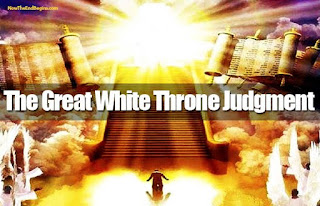 I believe the year is still new, even though its a very fast year. Its as if God is shortening the Time, the length of day keep moving rapidly every day. Compliment of the season to all the seed of God all over the World. God willing end time hub will going deeper this new year. God is taken us deeper in revelation and knowledge of Him and His ways. So be ye ready for deeper things. We call it #Deep things for Deep People#. Remember, deep calleth unto deep. If you are deep, or ready go deeper with God this new year, then prepare your heart and be open-minded.


We are starting this new year with a very crucial topic. When it comes to end time topics, the white throne judgement and the book of life is the most popular. It's even popular than the Rapture or Antichrist. Majority of Christian would have heard of it before. Unfortunately, majority of teachers or ministers are not rightly dividing the Word of God when it comes to this topic. There are lot of misconception and errors from majority of our Pentecostals, Orthodox and Charismatic church leaders. They taught that the name of a Christian is written in the book of life when you give your life to Christ. That is scripturally wrong. They teach that all men will be judged at the white throne judgement including the Bride of Christ. That is not correct.

All these we shall see in the light of the scriptures as we start this series. Our prayer is that, may your eyes of understanding be enlighten and be open minded to receive the True Revelation of God's Word in your heart by faith.

By now, we ought to understand from our previous teachings that prior to the white throne Judgement, the Rapture, The great Tribulation, the Great day of the Lord, Armageddon, Millennium and Gog/Magog war has taken place already, and Satan has been cast into the lake of fire where the Antichrist and the False Prophet were (Rev 20).

Stay in prayer as you read and study along with your Bible, because we are going to travel into some high and deep places!

"We will start with Rev. 20:7-8 "and when the thousand years are expired, satan shall be loosened out of his prison, to deceive the nations. Then verse 9 says, those who followed satan went up and compassed the camp of the saints and fire came down from God and devoured satan's followers. Now these saints were not the Bride but were some that were on the earth during the Millennium, (the Bride was higher up with Christ then!). Next in verse 11 and 12 a white throne appears, and the dead small and great stood before God. And the books were opened: and another book was opened which is the book of life. Verse 12, and the dead was judged out of those things which were totally already written in the first books which were opened! Then there was a separate book of life which has the names of the saints! The Bride is not judged under condemnation but her works are recorded and judged for her reward! (The sea, death and hell delivered up every person and they were judged. Then verse 14 says death and hell were cast into the "lake of fire"! So death and hell must be associated to but yet a different place than where the lake of fire is! Verse 15 "Whosoever was not in the book of life was cast into the lake of fire." (Yea saith the Lord and My preordained powers shall not make the slightest mistake in numbering the good from evil.) Amen!".
"THE GREAT WHITE THRONE resurrection of the wicked dead (This is the second Ressurection)."'Now this takes place a thousand years later than the very first resurrection of the raptured saints of our age!" - Rev. 20:11. "reveal~ that all the dead are raised for the final judgment! (verses 12-14) It says all those whose names were 'not' in the Book of Life were cast into the lake of fire! " (Taken from Neal Vincent Frisby writings).

Here we see that the Bride are nor judged under condemnation, it was what their wokrs, which they did with their bodies, resources and gifts given to them that were recorded and judged for their reward.


John 5:24
[24]Verily, verily, I say unto you, He that heareth my word, and believeth on him that sent me, hath everlasting life, and shall not come into condemnation; but is passed from death unto life.

2 Corinthians 5:9-10
[9]Wherefore we labour, that, whether present or absent, we may be accepted of him.
[10]For we (Believers) must all appear before the judgment seat of Christ; that every one (Still believers) may receive the things done in his body, according to that he hath done, whether it be good or bad.

Romans 8:1
[1]There is therefore now no condemnation to them which are in Christ Jesus, who walk not after the flesh, but after the Spirit.

John 3:18-19
[18]He that believeth on him is not condemned: but he that believeth not is condemned already, because he hath not believed in the name of the only begotten Son of God.
[19]And this is the condemnation, that light is come into the world, and men loved darkness rather than light, because their deeds were evil.

Now, prior to the white throne judgement, the Bride has finished receiving their training for Armageddon and Judgement during the marriage super of the Lamb in heaven while the Great Tribulation is taken place on earth, because the scripture made it clear that the Bride came down with Christ at Armageddon and will also partake in judging the wicked, unbelievers, kings, nobles and angels.


Revelation 19:11-14
[11]And I saw heaven opened, and behold a white horse; and he that sat upon him was called Faithful and True, and in righteousness he doth judge and make war.
[12]His eyes were as a flame of fire, and on his head were many crowns; and he had a name written, that no man knew, but he himself.
[13]And he was clothed with a vesture dipped in blood: and his name is called The Word of God.
[14]And the armies which were in heaven (Translated Bride) followed him upon white horses, clothed in fine linen, white and clean.

1 Corinthians 6:2-4
[2]Do ye not know that the saints shall judge the world? and if the world shall be judged by you, are ye unworthy to judge the smallest matters?
[3]Know ye not that we shall judge angels? how much more things that pertain to this life?
[4]If then ye have judgments of things pertaining to this life, set them to judge who are least esteemed in the church.

Psalms 149:6-9
[6]Let the high praises of God be in their mouth, and a twoedged sword in their hand;
[7]To execute vengeance upon the heathen, and punishments upon the people;
[8]To bind their kings with chains, and their nobles with fetters of iron;
[9]To execute upon them the judgment written: this honour have all his saints. Praise ye the LORD.

Revelation 20:11-15
[11]And I saw a great white throne, and him that sat on it, from whose face the earth and the heaven fled away; and there was found no place for them.
[12]And I saw the dead, small and great, stand before God; and the books were opened: and another book was opened, which is the book of life: and the dead were judged out of those things which were written in the books, according to their works.
[13]And the sea gave up the dead which were in it; and death and hell delivered up the dead which were in them: and they were judged every man according to their works.
[14]And death and hell were cast into the lake of fire. This is the second death.
[15]And whosoever was not found written in the book of life was cast into the lake of fire.


"SO, BRIDE (TRANSLATED SAINTS) SITS WITH HIM IN JUDGMENT. Revelation 3:21, "To him that overcometh will I grant to sit with Me in My throne, even as I also overcame, and am set down with My Father in His throne." See, the bride is with Him in the throne. As she is to judge the world she has to be sitting in the judgment with Him. That is exactly what Daniel saw. Daniel 7:9-10, "I beheld till the thrones were cast down, and the Ancient of days did sit, Whose garment was white as snow, and the hair of His head like the pure wool: His throne was like the fiery flame, and His wheels as burning fire. A fiery stream issued and came forth from before Him: thousand thousands ministered unto Him, and ten thousand times ten thousand stood before Him: the judgment was set, and the books were opened."
See, it is the same scene of Revelation 20:11-15 that Daniel also saw, for the thousand thousands who are ministering to Him are the bride, for who ministers to the husband but the wife?". (Taken from William Branham book, the seven Church Ages)

So, we see there is coming a judgment, a great white throne judgment, but before that those (The Foolish virgins) who do not make the rapture will go through (their own) judgment that will be so terrible, thats the Great Tribulation.  And any Christian in his right mind would not want to face that. And to think, as bad as the tribulation period will be, it will be even worse to stand before that white throne Judgment, knowing that every sin you ever committed in this flesh will have to be accounted for.

But, there is no judgment to the royal Seed, or the predestinated Seed of Abraham, as written in John 5:24, "He that heareth My Word, and believeth on Him that sent Me, has Everlasting Life."

We know most assuredly that the purpose of God stands in election. It was purposed in Himself. It was God's purpose to bring forth a people like unto Himself that would be a Word Bride. She was chosen before the foundation of the world IN HIM. She was fore-known and beloved before she was ever brought forth during the ages upon the earth. She was redeemed by His blood and can NEVER come into condemnation. She can never be in the judgment because sin cannot be imputed unto her. Romans 4:8, "Blessed is the man to whom the Lord will not impute sin." But indeed she shall be with Him in His throne of judgment, judging the world and even angels. Her name (each of her members) was written in the Lamb's Book of Life before the foundation of the world.

I believe you are blessed....

at January 13, 2018
Email ThisBlogThis!Share to TwitterShare to FacebookShare to Pinterest