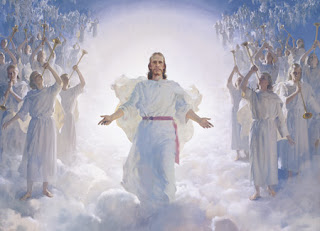 We bless the Lord Jesus Christ for how far he has helped us all this years. Our last series last year was the Armageddon and Millennium Series. Where we explained the Pattern of the Armageddon war, what will lead to the war, nations that will be involved in the war and even the kind of weapons that will be use in this war. From there we move to the Millennium Series, where we explain what happens before and during the millennium. You can log on to our home page to read on this topics. www.endtimehub.blogspot.com.

Now, what next is to move ahead to the our next series which is what happens after the millennium. But before I go into that, I will like to remind us the stages of the end time, that is review of events in perfect order..
1) Rapture
2) The Great Tribulation
3) Armageddon
4) 1000 Years Millennium
5) Release of Satan From Bottomless Pit
6) The White Throne Judgment
7) The New heaven and New earth appears

But before we go into the Post Millennium Series, Remember in our last teaching, we said and I quote "During the Millennium the Bride (the translated saints i.e the wise virgins) live in the higher realm with Jesus (in the heavens)." So, a question has been coming to my mind, what will be translated saints (the Wise virgins) be doing in heaven during the millennium on earth. But God gave me an insight early hours of the 1st of January.
We know that the white throne Judgement follows a short while after the millennium because Satan will be released a short while to deceive the people after Millennium.

Now, the scriptures reveals that the translated saints will be involved in the white throne Judgement with Jesus Christ. They will judge the world and angels (the fallen angels and demons). Let's see some scriptures that talk about this....

1 Corinthians 6:1-3
[1]Dare any of you, having a matter against another, go to law before the unjust, and not before the saints?
[2]Do ye not know that the saints shall judge the world? and if the world shall be judged by you, are ye unworthy to judge the smallest matters?
[3]Know ye not that we shall judge angels? how much more things that pertain to this life?


[9]I beheld till the thrones were cast down, and the Ancient of days did sit, whose garment was white as snow, and the hair of his head like the pure wool: his throne was like the fiery flame, and his wheels as burning fire.
[10]A fiery stream issued and came forth from before him: thousand thousands ministered unto him, and ten thousand times ten thousand stood before him: the judgment was set, and the books were opened.

Now, the scriptures above reveals this. Because Daniel 7:9-10 speaks about the white throne Judgement, and THRONES were cast down, So that ministered unto Him are the people that sat on this Thrones to help in judging the world and angels.
Having established that, let's move on to
1 Corinthians 6:5
[5]I speak to your shame. Is it so, that there is not a wise man among you? no, not one that shall be able to judge between his brethren?

This Scripture reveals that it's only a wise man that can judge, that's is to judge wisdom and knowledge is a pre-requisite. Another scripture is in...
2 Chronicles 1:10-11
[10]Give me now wisdom and knowledge, that I may go out and come in before this people: for who can judge this thy people, that is so great?
[11]And God said to Solomon, Because this was in thine heart, and thou hast not asked riches, wealth, or honour, nor the life of thine enemies, neither yet hast asked long life; but hast asked wisdom and knowledge for thyself, that thou mayest judge my people, over whom I have made thee king:

King Solomon have to request from God wisdom and knowledge in order to judge His people. So, what are we saying....

During the millennium, the translated saints will be receiving impartation of God's Wisdom and Knowledge. They will be taught and receive insights on how to go about judging the world and angels during the white throne Judgment.
I believe this is true and in accordance with the scriptures. This might not be the only thing the translated saints will be doing heaven but I believe this is an integral part of it.
What an experience this will be for those that make it up in the Rapture and escape the great Tribulation. This is an experience that a true child of God should cherish and desire to be part of.

So Brethren, my heart's desire and prayer to God for some true christian, is that they might go up in the Rapture. For I bear them record that many of them have a zeal of God, but not according to knowledge. For they being ignorant of God's Truth and going about to believing and following doctrine of men which has blinded their eyes of understanding, by so doing they have not submitted themselves unto every Word of God which able to redeem their bodies, soul and spirit and also go up in the Rapture.
It's high time we put aside all the lie and doctrine of men and follow after the Truth of God's Word, because every Word of God must be known, understood and live by it for you to make it up the Rapture, there no two ways about it. There is a Rapturing message that gives you the Rapturing faith and anointing needed to go up in the Rapture, this we do on End time hub and our other websites.

DOMINALTI for CHRIST
On Behalf of End Time Hub!!!
at January 11, 2017
Email ThisBlogThis!Share to TwitterShare to FacebookShare to Pinterest