UNDERSTANDING THE ORDER OF THE END TIME EVENTS 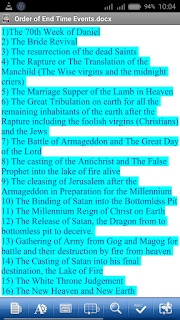 From our previous article of the meaning of the Greek word for generation (Genea) having to do with the ‘birth or begetting’ of the nation of Israel, in my own Opinion, it seems logical that the END GENERATION IS FOR A PERIOD OF 100 YEARS from start to finish, e.g. 100 years is the longest period for a biblical generation.
The number 70 is especially associated with Israel’s  bondage, captivities, exiles, return and completion off all vision and prophecy. As for when will this generation and this present earth will come to an end after the rapture, I will leave each believers to do their calculation themselves prayerfully based on my explanation on generation in our previous article. I think I have my own personal revelation on this matter, and will like to keep it to myself.

Having established that this world will surely come to an end. The needful thing to do now is give a list of order of events that make up the end time. The Scriptures and other Christian literature, including the script and the scroll is very plain as for the arrangement of this events. In this article I want to give a summary of the order of these events, in my subsequent teachings, we are shall now take this events one after the order.
But, if are a true follower of this blog, we ought to know by now that we have already touched, some of these events, so it will be of no need for us to repeat some of them anymore. Kindly click any of the events that is linked and take time to study for yourselves.

The Order of End Time Events

1)The 70th Week of Daniel
2) The Bride Revival
3) The resurrection of the dead Saints
4) The Rapture or The Translation of the Manchild (The Wise virgins and the midnight criers)
5) The Marriage Supper of the Lamb in Heaven
6) The Great Tribulation on earth for all the remaining inhabitants of the earth after the Rapture including the foolish virgins (Christians) and the Jews
7) The Battle of Armageddon and The Great Day of the Lord
8) The casting of the Antichrist and The False Prophet into the lake of fire alive
9) The cleasing of Jerusalem after the Armageddon in Preparation for the Millennium
10) The Binding of Satan into the Bottomless Pit
11) The Millennium Reign of Christ on Earth
12) The Release of Satan, the Dragon from to bottomless pit to deceive.
13) Gathering of Army from Gog and Magog for battle and their destruction by fire from heaven
14) The Casting of Satan into his final destination, the Lake of Fire
15) The White Throne Judgement
16) The New Heaven and New Earth

This is the order of the end time events, starting from our next series, we should start taking one by one except for number 7 and number 10 to number 14 which has been taught recently on the blog.
Make sure you stay Connected, you will be blessed and be filled the extra oil&translative faith need to go up the Rapture.

In the midst of these teachings, we will surely teach on some personalities and other topics of the end of time. The list follows below - :

*The Antichrist
*The False Prophet
*The Dragon
*The Bridegroom
*The Foolish Virgins
*The Wise Virgins
*The Midnight Criers
* The Manchild
*The Image of the beast
*The Mark of the Beast
*The Bottomless Pit
*The Book of Life
*The Lake of fire
*Paradise
*Hell
*Number 666, and lots more

Finally, let me summarise the order of these events from Neal Frisby’s Writtings in the scroll book
"THE CLARIFYING OF EVENTS - "First there will be a translation of the elect. (Rev. 12:5) - Then the last part of the Great Tribulation starts (verse 6, 17) ¬ Now after the Battle of Armageddon and The Great Day of the Lord . . . this is what occurs step by step! . . . Satan will be bound and cast into the bottomless pit for one thousand years; the beast and the false prophet will be cast alive into the lake of fire (Rev. 20:1-2; 19:20). The nations will be called before the Lord for judgment, according to Matthew 25:32. . . . Then Israel will be chief among the nations, and the Lord Jesus Christ will set up His kingdom in Jerusalem and reign over the earth for one thousand years, Satan will be loosed out of his pit and will gather together a vast army, who will refuse God's King. Fire will fall from heaven and devour them! (Rev. 20:7-10) - Then all the wicked dead of all ages shall be gathered before the great white throne, be judged for their rejection of God's salvation, and be cast into the lake of fire! (Rev. 20: 11, 15) - Then will appear a new heaven and a new earth wherein dwelleth righteousness! (Rev. 21 and 22)."

Stay tuned and tell more Christians about this blog, and God bless you as you do so...

DOMINALTI for CHRIST
On behalf of End Time Hub!!!
at March 20, 2017
Email ThisBlogThis!Share to TwitterShare to FacebookShare to Pinterest