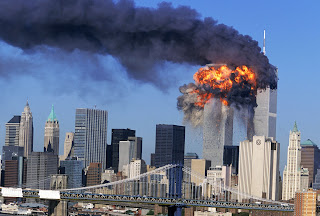 Where were you on Sept. 11, 2001? If you’re like most people, the horrifying images and emotions of that day are per- manently etched into your mind. Who can forget the sight of a giant airliner slamming into the World Trade Center, USA, the trapped men and women plunging to their deaths, the collapse of the towers and the cloud of pulverized concrete and debris that covered Manhattan?


At the beginning of a new century, it heralded a new age of mass terrorism directed at civilians
. America’s sense of securitythat it could never happen on its shores was forever shattered. Other nations quickly realized that similar catastrophes could strike their cities (and indeed, deadly attacks soon followed in Turkey, Spain, Russia, Germany, Belgium, France, England, Jordan and other countries).

The shocking suicide attacks of Sept. 11, 2001, showed that events in the Middle East impact the entire world.
Terrorism has become a very real threat for millions around the globe. That day’s horror also catapulted the Middle East to the forefront on news programs around the world. Suddenly, what was happening thousands of miles away could affect people regardless of where they lived. A region that, to many, had seemed irrelevant now became the focus of attention as nations everywhere awakened to the reality of how the Middle East impacts us all.

The reality quickly came home that problems thousands of miles away can have a greater impact on us than decisions made by our own local or national governments. The fall of the Twin Towers had an immediate effect on the American economy far greater than any decision made on nearby Wall Street, with an estimated $100 billion loss in direct damages and $2 trillion in short-term stock market losses.

The Middle East affects us all but Sept. 11 was not the start of terrorism, Islamic fundamentalism or confict in the Middle East. As part of a historic continuum, it was simply the date on which the accumulated problems of thousands of years finally reached America’s shores.
Considering how much the Middle East now dominates the news, it’s hard to believe that at the beginning of the last century the Middle East “was of only marginal concern” to the Western world. “The region had become a political backwater,” according to historian David Fromkin, author of A Peace to End All Peace (1989, p. 24), a book about the birth of the modern Middle East.
A century later, however, nations around the world are all affected by what happens in this volatile region. The global economy runs on oil, most of which lies under the sand of Middle Eastern deserts. Oil is the lifeblood of Western economies and affuence, and a plentiful and cheap supply is essential to continued Western prosperity. This dependence on oil has fundamentally altered the Western nations’ relationship with the region, transforming it into a strategically vital part of the world.
A second fundamental change has taken place in the Middle East in the last 100 years—the creation of many new nations, which has vastly complicated the politics of the area. The establishment of one country in particular has led to a cycle of violence and upheaval that is seemingly without end. Yet, surprisingly, the Bible prophesied the establishment of this nation thousands of years ago and predicted the growing confict that would follow its rebirth.

World War I was often called “the war to end all wars.” At the close of the peace conference following the worst confict in history, Archibald Wavell, an offcer who served with the British Army in Palestine and was later promoted to feld marshal, prophetically declared, “After ‘the war to end war’ they seem to have been pretty successful in Paris at making a ‘Peace to end Peace’” (Fromkin, p. 5). 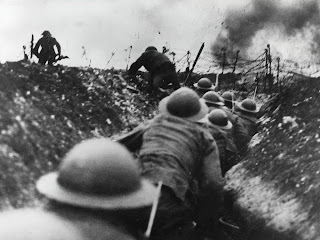 Before World War I the Middle East was dominated by the Ottoman Empire, the empire of the Turks who ruled over all the lands whose names are now so familiar to us. The countries that are now Turkey, Lebanon, Syria, Iraq, Kuwait, Jordan, Israel and others were all ruled by a declining empire that had once also presided over vast lands in both North Africa and southeastern Europe. Within this empire different peoples lived in relative harmony. About 40 percent of the people were Turks and 40 percent Arabs, with the remainder a mixture of different ethnic groups—Armenians and Jews being the most numerous of these.
It might have continued this way were it not for World War I. At the onset of war, it was not clear which side the Ottoman Empire would support. Both the British and the Germans courted the Turks. Finally the sultan opted to support the German kaiser, a fatal decision that ulti- mately led to the birth of many new nations—and wars seemingly with- out end. One of the nations that eventually came into being was the Jewish state of Israel, complicating the geopolitical situation in the region and destined to affect all nations on earth.
What few realize is this one crucial fact: After 1,900 years, the restoration of a Jewish homeland in the Middle East was necessary to fulfll ancient prophecies you can find in the Bible. This region, once a “political backwater” of little or no interest to the Western powers, is destined to become the center of the final global crisis that will usher in cataclysmic events leading humanity to the brink of extinction and ultimately change our world forever.
You need to understand what is prophesied to yet happen in the Middle East. Whether you realize it or not, or understand it or not, events there are destined to have a significant influence in the second coming of Jesus Christ and the Rising of the Antichrist.

Why does the Middle East Dominate The Headlines so often? 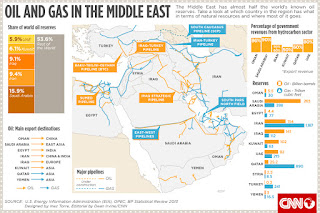 One obvious answer is oil, the lifeblood of modern economies. Without oil to run factories, heat homes, fuel transportation and provide energy and raw materials for thousands of uses, the economies of many nations would grind to a halt. The crucial importance of oil alone ensures that the Middle East will remain in the headlines for few more years till the Antichtist take over the oil.
But there’s more that keeps the Middle East in the news. It is the birthplace of the world’s three great religions Judaism, Christianity and Islam. Too often it has not been just their birthplace, but their battlefeld, with adherents warring against each other for control of territory they consider holy.
Nowhere are these conficts more obvious than in Israel, and specifcally in Jerusalem. If you’ve never been to Jerusalem, it’s hard to imagine how so much history, religion and culture can collide and stand in literal heaps. Nowhere is this more evident than at the Temple Mount, flash point for many a confict over the centuries. 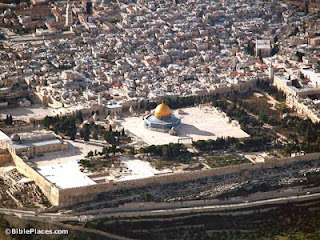 The site first came to the attention of Israel’s King David, who bought a threshing floor and built an altar on it, intending it for the site of the temple (1 Chronicles 21-22). The Temple Mount is so named because it is the location of the temple built by David’s son Solomon (destroyed by the Babylonians in 586 B.C.) and its replacement built by Zerubbabel and later enlarged by Herod the Great (ultimately razed by the Roman general Titus in A.D. 70).
Here Jesus Christ, The Lord worshipped, taught and confronted the money changers, scribes, Pharisees and other religious authorities. After His death and resurrection, Christianity was born in the temple’s shadow. His followers continued to worship and teach there for several more decades until the legions of Rome crushed a Jewish rebellion and carted away most of the Jewish population they hadn’t killed. A later Jewish rebellion, in 132-135, led to a Roman decree that no Jew was to set foot in Jerusalem on pain of death.
Centuries later, in 638, Muslim Arabs took the city. In 691 Muslims built the Dome of the Rock on that same Temple Mount, enclosing the spot from which, Muslims believe, Muhammad ascended to heaven (A lie from the pit of hell). Today Muslims consider it the third-holiest site in Islam, after Mecca, where Muhammad was born, and Medina, where he found refuge and died (He died not ascended)

Several more centuries passed before the Crusaders captured Jerusalem, slaughtered Muslim and Jew alike and converted the Dome of the Rock into a church. Their hold on the city lasted less than a century before Muslims recaptured it. Jerusalem changed hands three more times before Muslims took control of the city and held it from 1244 until 1917, when the Ottoman Empire lost its hold in World War I and the city came under British administration.
In 1948 the modern state of Israel was born, and in the 1967 war the Israelis gained control of all of Jerusalem, though leaving the Temple Mount under Islamic authority.
Today one can watch Muslims praying at the Dome of the Rock atop the Temple Mount, Jews praying at the Western Wall barely a stone’s throw below and Christians praying along the Via Dolorosa and at the Church of the Holy Sepulcher a few hundred yards to the north and west. And all around one sees the rubble of the centuries of confict over this holy place.
Who will write the next chapter in the history of this troubled city? Believe it or not, the final chapters are already written— prophesied centuries ago in the pages of the Bible. Ominously, they mesh remarkably well with today’s headlines.

In the next few articles under this series, we will see where all these events happening in the middle east will lead to and their significance in the Translation of the Bride at Jesus Coming.
I believe you now have the detailed understanding of the history of the temple mount and the different buildings inside it.

Dominalti For CHRIST
On Behalf of End Time Hub!!!
at July 07, 2017
Email ThisBlogThis!Share to TwitterShare to FacebookShare to Pinterest