UNDERSTANDING THE SATANIC TRINITY - The Dragon, The Antichrist and The False Prophet 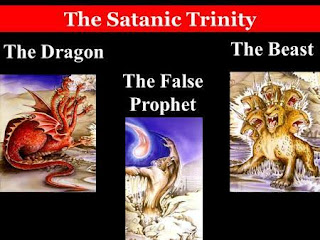 As we continue on the series, The great Tribulation, I will like to talk on the satanic trinity in Rev. 16, before I go in details on who the False Prophet of Rev 13 is in my next teaching. This teaching on the second prophetic beast of Rev 13 promise to be revelatory and insightful, just stay connected. As we await that let's take time to understand the satanic trinity

The Scripture above revealed that at the end of time the time, Three different and distinct persons will work together to fulfill the same mission and assignment. This three persons have their individual unclean spirit of the devil.


Revelation 20:2
[2]And he laid hold on the dragon, that old serpent, which is the Devil, and Satan, and bound him a thousand years,

The Prophet of this generation, Neal Frisby, in the prophetic scroll

"LUCIFER AND THE EVIL ANGELS "

"A third of the false angels rebelled against God and His government. (Rev. 12:4) - Lucifer led the rebellion to set up his own kingdom. (Isa. 14:14-17) - The warfare between Lucifer's counterfeit and God's real kingdom has continued 'til this day!" Read Dan. 10: 13 . . . "And the warfare continues into Rev. 12:7-9, casting satan completely into the earth! (Read Isa. 66:15) - And Rev. chaps. 19 and 20 show the final warfare when it is completed wherein God and His angels defeat satan and his angels in finality . . . then the eventual cleansing and restoration of the earth to its Edenic perfection! (Rev. 21) - Then God's plan for this galaxy and planet will be accomplished!"

"What is the final outcome of satan?"

"We know what happens to his man the beast, but what is the final out- come of satan.  - Ezek. 28, "reveals many secrets, and we will consider a few. The first few verses reveal in symbolism the actual antichrist. Verses 12-17 reveal the beautiful energy and forces that satan is created out of. But God said that He would destroy him that once was a covering light (cherub) and cast him out from his flaming wonders (stones of fire) vr. 16. - Evidently within satan's own creative fixtures (glowing stones that make up his form covered by strange lights for he is an angel of evil light) - within these stones in the beginning was made his destruction to ignite at a certain time hence! – Because vr. 18 says God will bring fire from the midst of him, completely devour him and leave him in ashes!" vr. 19, "completes the picture, and it says, never shalt thou be any more!" . . . "Think about this, God truly is the only one that is eternal and He giveth this light to His saints!" Hallelujah!!!

Revelation 13:1-2
[1]And I stood upon the sand of the sea, and saw a beast rise up out of the sea, having seven heads and ten horns, and upon his horns ten crowns, and upon his heads the name of blasphemy.
[2]And the beast which I saw was like unto a leopard, and his feet were as the feet of a bear, and his mouth as the mouth of a lion: and the dragon gave him his power, and his seat, and great authority.

You can read our teachings on Antichrist below

2) The antichrists and The Antichrist spirit


Revelation 13:1-2,11-12
[1]And I stood upon the sand of the sea, and saw a beast rise up out of the sea, having seven heads and ten horns, and upon his horns ten crowns, and upon his heads the name of blasphemy.
[2]And the beast which I saw was like unto a leopard, and his feet were as the feet of a bear, and his mouth as the mouth of a lion: and the dragon gave him his power, and his seat, and great authority.
[11]And I beheld another beast coming up out of the earth; and he had two horns like a lamb, and he spake as a dragon.
[12]And he exerciseth all the power of the first beast before him, and causeth the earth and them which dwell therein to worship the first beast, whose deadly wound was healed.

You can read our teaching on the False Prophet below..

The False Prophets and THE FALSE PROPHET

So, During the great Tribulation just after the Rapture, these three shall work together for same mission and purpose. They will deceive so many people and compel them to worship the dragon and the image of the beast...

Revelation 16:14-16
[14]For they are the spirits of devils, working miracles, which go forth unto the kings of the earth and of the whole world, to gather them to the battle of that great day of God Almighty.
[15]Behold, I come as a thief. Blessed is he that watcheth, and keepeth his garments, lest he walk naked, and they see his shame.
[16]And he gathered them together into a place called in the Hebrew tongue Armageddon.
(Also read Rev. 9:11-14, 19-21).


I believe a true child of God should see now that Satan is the only god of Trinity and Trinity is not of God and so it's a false doctrine that comes from satan. The scriptures revealed

James 2:18-19
[18]Yea, a man may say, Thou hast faith, and I have works: shew me thy faith without thy works, and I will shew thee my faith by my works.
[19]Thou believest that there is one God; thou doest well: the devils also believe, and tremble.

So, the difference is very clear. But unfortunately many of these trinity believers and their founding fathers ignorantly and intentionally give in to this lie of the devil just because of worldly gains and popularity.

I think now is the best time to answer their question. For sure, the word "trinity" is never of God and is not in the scriptures, but I will define it according to the definition the founding fathers of Trinity gave it. They say and I quote

"Trinity means three distinct and different persons that make up God. God the Father, God the Son and God the HolyGhost". (That is three lords, three persons, three bodies and three spirits cause each persons has their own spirit). And no scriptural backing for this. It all started from Roman Catholic Church, Babylon the great.


Godhead simply means one person that make up God who can operate and function in diverse offices as Father,Son,  Holy Spirit, Saviour, Healer, Deliverer, Redeemer, Angel,  etc but still one person. God is One Lord, One Person, One Body and One Spirit. Col. 1:19, 2:9 and Eph 4:4 - 6.

God is never an author of confusion, satan is. Many defenders of trinity always pick two or three scriptures to defend trinity, but our previous article, it revealed with more than 70 scriptures that Trinity is of the devil not from God.


As simple as this looks like, many Christians will miss the Rapture just because of this and that's why we are sounding it loud and clear now. Someone may say it's not possible to miss the Rapture because of Trinity. But they forgot to take note that they intentionally refused to believe and accept the revealed Truth of the Word of God in its Totality rather they choose to believe the lies of men and of the devil.

Believing in Trinity God indicate that the Christian did not know the God he is serving, He did not know His name. Also such a Christian is expecting to see 3 lords on three different thrones in heaven  (that is He want to marry 3 Bridegrooms), and God been God who is not a Fornicator and never know any other God beside Him will deny such a foolish Christian the Marriage Supper of he Lamb which take place in heaven immediately after the Rapture.


So let him that desire to go up in the Rapture and partake in the Marriage Supper of the Lamb should quickly do the needful right now which are:-
*Believe Every Word of God in its Totality (100%),Mat. 4:4
*Disbelieve Trinity and Believe Godhead
*Be baptize in the name of the LORD Jesus Christ
*Come out of Babylonian Churches... (Rev 18:4-5).
*By so doing God will receive you as a wise virgins and count you worthy to go up in the Rapture.

DOMINALTI for CHRIST
On Behalf of End Time Hub!!!
at November 17, 2017
Email ThisBlogThis!Share to TwitterShare to FacebookShare to Pinterest