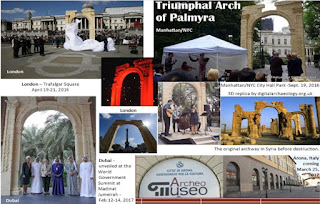 A replica of a Roman arch that once stood in front of the pagan Temple of Ba’al was erected for the World Government Summit in Dubai this week, creating a scene that one rabbi claims symbolizes the dangerous fusion of Ishmael and Edom against Israel.

The original Roman Victory Arch stood for 1,800 years in Palmyra, Syria, until it was destroyed by ISIS in October 2015. A full-size 28-meter tall replica of the arch was created last year by the Institute for Digital Archeology, a joint project of Oxford and Harvard universities, and has been displayed in New York and London.
The replica was erected for the opening of the World Government Summit that opened on Sunday in Dubai. Based in the United Arab Emirates, the summit is an international organization for global dialogue where leaders in government, business, and technology discuss how governments operate and how policies are made.

The first summit, held in 2013, was attended by former US President Barack Obama, former UN Secretary General Ban Ki-Moon, and other world leaders.
Though a Roman artifact recreated in a modern Arab metropolis may seem incongruous, Rabbi Pinchas Winston, a prolific author and End of Days scholar, saw a deeper meaning in it that is incredibly relevant today.
Though Rome and the Arab Emirates appear in different parts of the world and at different points in history, Rabbi Winston sees them as connected ideologically and spiritually.
“Tradition tells of four exiles, the last being the Roman exile. Israel is being assailed by the Arabs but nowhere do we hear of a fifth, Arab or Ishmael exile,” explained Rabbi Winston. “This Roman arch in Dubai symbolically ties them both together: Ishmael, the Arabs, and Edom, which was epitomized by Rome.”

The original arch in Palmyra, built by Roman Emperor Septimius Severus, stood in front of a preexisting temple that was used by the Mesopotamians to worship the pagan god Bel, mentioned often in the Bible as Ba’al.
"For he built again the high places which Chizkiyahu his father had destroyed; and he reared up altars for Baal." II Kings 21:3
“Just like the Romans, the Arabs are trying to control the world, and succeeding,” said Rabbi Winston. “Even though it is the Arabs against the Jews, it is really the Arabs continuing the mission of Edom to conquer the world. This connection between Dubai and Rome is showing that Edom never ended. It just put on a different mask.”

The first century Jewish sage Jonathan ben Uzziel wrote about how this Biblical alliance between Ishmael and Esau and would reappear at the End of Days. Clear evidence of the spiritual connection between these two seemingly disparate worlds can be found in the growing political cooperation between Rome and the Muslim/Arab world.
The bond has manifested in the strengthening of ties between the Vatican and the Palestinian Authority, as well as Pope Francis’ meeting with the President of Iran.

Though Edom and the desire to rule the world is personified by Rome, Rabbi Winston explained that the archetype has Biblical roots.
“The push for one world government goes back to the Tower of Babel, trying to put the power in the hands of the wealthy, the powerful, and the arrogant,” he said.
And they said: ‘Come, let us build us a city, and a tower, with its top in heaven, and let us make us a name; lest we be scattered abroad upon the face of the whole earth.’
Genesis 11:4
“The Arab desire to rule the world is part of their religion and that is also very Roman,” continued Rabbi Winston. “World rule is also the religion of the rich and powerful.”
The motive behind world rule can sound altruistic, but Rabbi Winston noted a critical distinction.
“The desire to fix the world and to make it a better place resembles a Messianic movement,” the rabbi said. “But unless it is based in God, it is twisted and turns destructive because it is based on ego."

The reproduction appeared for the first time in London last April during the UNESCO Heritage Week, which coincided disturbingly with Beltane, a major pagan festival for worshiping Ba’al. The arch appeared again in New York City’s City Hall Park last September.
For more on this subject matter see http://www.finaldestination666.com

Now let me make my additions
"All these movements is for a reason, and it's very glaring...The Scriptures and prophecies in Bible has revealed,  in fact, almost all the news all over the world is fulfillment of Prophecy, signaling to us that Jesus is at the Door.
So, The people of the false messiah (the antichrist) are preparing the way for their master to rise, we understood according to the book of Revelation and Daniel, they will come through peace and prosperity, but a false and short one.... But through this, almost all nations and people (including the so called Christians, the Wise and Foolish virgins) will believe and accept him. But the midnight criers will know him and point him out,as I am doing now.
Before this man of sin show forth his true colour, the elect would have been raptured".
Remember when they shout peace and security, sudden destruction come upon them, it will be like a snare.

This is the right time to give your life to Christ...

You must be Born again...

Christ is Coming soon.... Are you ready?

DOMINALTI for CHRIST
On Behalf of End Time Hub!

at February 24, 2017
Email ThisBlogThis!Share to TwitterShare to FacebookShare to Pinterest