It's no more a news that On Monday, August 21, 2017, yesterday , a total solar eclipse took place visible in totality within a band across the entire contiguous United States. And some other countries experience partial eclipse

First let's see the report by BBC with Pictires and videos, then we see its prophetic significance in this end of time.

BBC Report of The Eclipse 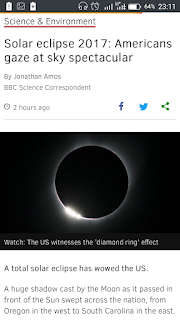 A total solar eclipse has wowed the US.


A huge shadow cast by the Moon as it passed in front of the Sun swept across the nation, from Oregon in the west to South Carolina in the east.
Millions of people moved to get into the path of darkness, putting on their protective glasses to gaze at the sky in wonder.
It was the first total solar eclipse visible from America's lower 48 states in 38 years, and the first since 1918 to track from coast to coast. 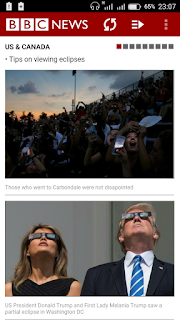 Skywatchers gathered at coastal beaches and towns witnessed the Sun's disc being completely obscured by the Moon for two minutes.
But just before and just after "totality", they also got to see some of the classic features of a full solar eclipse.

These included "Baily's beads" which arise as the last shafts of sunlight drive through valleys on the Moon; and the "Diamond Ring", which is the single brilliant point of light that signals the beginning and end of totality. 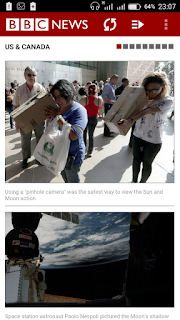 From Oregon, the eclipse shadow raced on through Idaho, Montana, Wyoming, Nebraska, Kansas, Iowa, Missouri, Illinois, Kentucky, Tennessee, Georgia, North Carolina, and South Carolina. It was a journey that took roughly 90 minutes.
Small towns along the path were inundated with visitors. So were the National Parks.

In Carbondale, Illinois, city authorities billed their locality as the "Eclipse Crossroads of America" because it would enjoy totality both on Monday and when the next US eclipse occurs in 2024.
As anticipated, Carbondale proved to be a huge magnet to skywatchers who made good use of the more than 60,000 extra car parking spaces organised for the day.
The area also had the privilege of enjoying the longest period of darkness anywhere in the country at just over two minutes and 40 seconds. 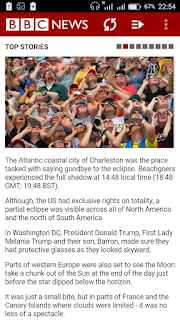 The Atlantic coastal city of Charleston was the place tasked with saying goodbye to the eclipse. Beachgoers experienced the full shadow at 14:48 local time (18:48 GMT; 19:48 BST).

Although, the US had exclusive rights on totality, a partial eclipse was visible across all of North America, reaching beyond the Canadian Arctic; as well as across the north of South America down to Bolivia.
Parts of western Europe were also set to see the Moon take a chunk out of the Sun at the end of the day just before the star dipped below the horizon.
It was just a small bite, but in parts of France and the Canary Islands where clouds were limited - it was no less of a spectacle. 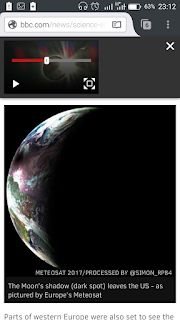 For those outside the path of the Moon's shadow or smothered by poor weather, there was always the internet.

The US space agency (Nasa) streamed pictures from many vantage points including from a series of helium-filled balloons.
Some of the most spectacular shots of the day came from orbit.

Italian astronaut Paolo Nespoli looked down on the moving shadow from the International Space Station.
And from their "stationary" positions some 36,000km above the planet, meteorological satellites also returned some stunning imagery.

The next total solar eclipse on Earth is on 2 July, 2019, over the South Pacific, Chile, Argentina. 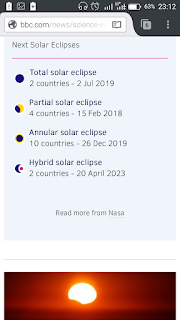 Watch BBC Video report of this America Great Eclipse below

You can also watch it here

Except from the prophetic scroll by Bro Neal Frisby.

Eclipse occurs when heavenly bodies - the sun, moon and earth cross each other causing shadows and unusual darkness upon the earth. The study of these heavenly bodies according to the cosmic knowledge of the Holy spirit is known as PROPHETIC ASTRONOMY

SOLAR ECLIPSE is (the sun) when the moon passes between the sun and the earth blocking the light from the sun either TOTAL, PARTIAL or ANNULAR from striking through.

A LUNAR ECLIPSE occurs when the Moon passes directly behind the Earth into its umbra. This can occur only when the sun, Earth, and moon are aligned exactly, or very closely so, with the Earth in the middle.

Jesus said, signs in the heavens would play a vital role in revealing His second coming! The scriptures tell us as the age closes, the heavens will declare His coming, giving warnings. Gen 1:14 "the Lord said, let them (STARS, SUN, MOON) be for signs and for season and for days and for years" so we see these heavenly bodies will be meeting in appointments preordained by God. They did at His first coming they will do at His second coming!


Prophetically the heavens are speaking and portraying a story, showing forth rare and unusual conjunction, alignment, eclipse etc as it forecast shadows of unknown tongue to us. In other words, the heavens tell the story of things to come.
In Matt 24:3, the disciples asked" what shall be the signs of thy coming"? And Jesus said in Luk 21:25  "there shall be signs 'LITERALLY' in the sun and in the moon and in the stars.

EFFECT OF THESE SIGNS

Distress of nations (revealing the nations in the street, anguish, bewilderment, terrible economic and famine conditions, changes in leaderships, governments, assassination!-), with perplexity (without resource, in doubt not knowing which way to turn); the seas and the waves roaring ( terrible weather - condition for the sea has much to do with our climate, storms, tornadoes, hurricane, sea quakes, tidal waves etc.). Past history attests to these event - Europe, Turkey -1998, Asia, Indonesia - 2000 up-to-date - The TSUNAMI etc.

Note
Every continent and area it passes experience CHANGES

What is peculiar about THE ECLIPSE and THE USA, more to write. But one more thing to note is that when and wherever this take place, crime, riot, unrest and violence might increases, lets watch out for these in the coming weeks, months or years especially in the cities that experience the total eclipse.

What then is ahead for us? Is God not talking through nature using these to call man's attention to His soon return? Yes, God is using nature to preach to us that the end is so near than you think.

Be born again and run unto Christ for safety now there is still time, as the bride of Christ awaits the rapture looking up for their redemption and the coming of the Lord in the thunders - Rev 10.


When an eclipse that lasted for hours in the 1800 happened, many started repenting, but when it cleared up they returned to their vomit (sin). Are you like that today?
Read Luke 21:25-27, Amos 8:9.

Be part of this end time harvest work by forwarding this message to as many you can. Save a soul today.

Next analysis i will take time to explain the September 23 great sign... It will be rich and detailed for a better understanding.. God willing i will also write more on Eclipse and its Prophetic significance.

at August 22, 2017
Email ThisBlogThis!Share to TwitterShare to FacebookShare to Pinterest