CHRISLAM: A TYPE OF ONE WORLD RELIGION TO COME - PART 2 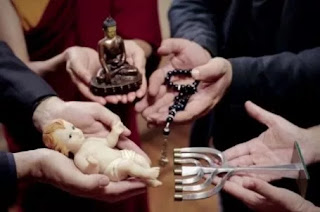 2 Peter 2:1-3
[1]But there were false prophets also among the people, even as there shall be false teachers among you, who privily shall bring in damnable heresies, even denying the Lord that bought them, and bring upon themselves swift destruction.
[2]And many shall follow their pernicious ways; by reason of whom the way of truth shall be evil spoken of.
[3]And through covetousness shall they with feigned words make merchandise of you: whose judgment now of a long time lingereth not, and their damnation slumbereth not.

In our first article on Chrislam, I explained the history and significance of Chrislam which is a type of Antichrist Religion to come, a one world religion. You can read that HERE

Now, if you are a Bible student and a lovely enquirer, you should know this will happen, when the liberal “love gospel” preachers who, desiring to fill their seats and bank accounts, would find a way to merge apostate christianity with the Devil’s religion of Islam. That day is here.

Rick Warren, founder and pastor of Saddleback Community Church in Orange County California, addressed the convention of the Islamic Society of North America. Warren stated that Muslims and Christians must work together to combat stereotypes, promote peace and freedom, and solve global problems. Christians and Moslems – faith mates, soul mates and now work mates! Chrislam!
“Before we “shake your hand” in responding to your letter, we ask forgiveness of the All-Merciful One and of the Muslim community around the world.” – Rick Warren in a speech to Muslims. 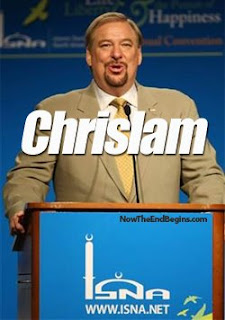 This is the first such effort I’ve heard of by an evangelical mega-church. Many evangelicals regard Islam as Christianity’s number one enemy, and they do not at all agree that the two faiths worship the same God. This is likely to make waves.
The Rev. Rick Warren, pastor of Saddleback Church in Lake Forest and one of America’s most influential Christian leaders, has embarked on an effort to heal divisions between evangelical Christians and Muslims by partnering with Southern California mosques and proposing a set of theological principles that includes acknowledging that Christians and Muslims worship the same God.

The Birthplace of Chrislam: ISNA 2009


Watch the video that shows the humble beginnings of how Chrislam began. We present a 23 minute clip from his speech at that convention, in the which you will hear him discuss nuggets like the importance of globalization, how Christians and Muslims need to "lay down their differences" and work together, and so much more.
Rick Warren, in his own words, has no problem with the concept and doctrine of Chrislam, he just doesn't want his own name attached to it. Watch the video here

Is It Only Rick Warren, What of Pope Francis? 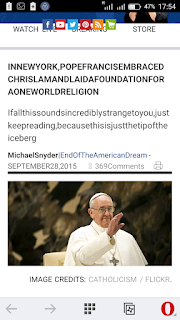 A new video has just been released in which Pope Francis very clearly expresses his belief that all of the major religions are different paths to the same God. He says that while people from various global faiths may be “seeking God or meeting God in different ways” that it is important to keep in mind that “we are all children of God”. This is the most recent example that shows that the Pope has completely abandoned any notion that a relationship with God is available only through Jesus Christ. As he has done throughout his papacy, he continues to lay the groundwork for the coming one world religion, and yet hardly anyone seems to understand this.

The following comes from an article that was put out by Catholic News Agency…
The Pope’s first-ever video message on his monthly prayer intentions was released Tuesday (Jan 6, 2017), highlighting the importance of interreligious dialogue and the beliefs different faith traditions hold in common, such as the figure of God and love.
“ Many think differently, feel differently, seeking God or meeting God in different ways. In this crowd, in this range of religions, there is only one certainty that we have for all: we are all children of God ,” Pope Francis said in his message, released Jan. 6, the feast of the Epiphany.
But it isn’t just Pope Francis speaking in this video. In fact, one section of the video features leaders from various global religions expressing faith in their respective deities.

The following comes from an article about this new video that was posted on Christian News Network …
The video then features clips of those from different world religions declaring belief in their various deities.
“ I have confidence in Buddha ,” a female lama announces.
“ I believe in God ,” a rabbi affirms.
“ I believe in Jesus Christ ,” a priest states.
“ I believe in Allah,” an Islamic leader declares.

Pope Francis closes the video with an appeal for people from every religion to talk with one another and to work with one another.
Later on, after the Pope affirms that all, regardless of their religious profession, are children of God, the faith leaders state their common belief in love.
Pope Francis closes the video by expressing his hope that viewers “will spread my prayer request this month: that sincere dialogue among men and women of different faiths may produce fruits of peace and justice. I have confidence in your prayers.”
If you have not seen this video yet, it is definitely worth a few minutes of your time. You can watch it right here 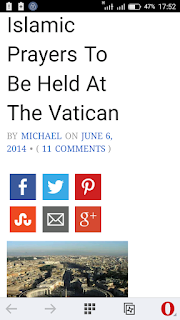 This is not the first time that Pope Francis has done something like this. Very early in his papacy, he authorized “Islamic prayers and readings from the Quran” at the Vatican for the first time ever. During his visit to St. Patrick’s Cathedral in Manhattan he made it very clear that he believes that Christians and Muslims worship the same God. There he embraces Chrislamaand laid foundation for a one world religion. The following is how he began his address …

"I would like to express two sentiments for my Muslim brothers and sisters: Firstly, my greetings as they celebrate the feast of sacrifice. I would have wished my greeting to be warmer. My sentiments of closeness, my sentiments of closeness in the face of tragedy. The tragedy that they suffered in Mecca.
In this moment, I give assurances of my prayers. I unite myself with you all. A prayer to almighty god, all merciful."
In Islam, one of Allah’s primary titles is “the all-merciful one”. If you doubt this, just do a Google search. And this certainly was not the first time that Pope Francis has used such language.

For example, check out the following excerpt from remarks that he made during his very first ecumenical meeting as Pope… 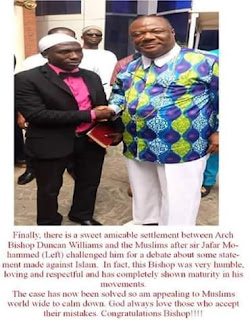 Recently a Muslim, Jafaru Ahmed challenged Duncan Williams to a debate because, according to him, Duncan William denounced Islam as the religion of the Devil. After several weeks of challenge a peace meeting was held and in that meeting, the very respected Bishop apologized for saying the truth about Islam. He even went further to beg the Muslim leaders to forgive him in the name of Allah. describing Islam with flowery words. That's another so called man of God for you.

What will All these lead to?

My brethren, as I had earlier analyze the Significance of all these meddling between Christian and Islamic leaders all over the world, I Wil like to re-emphasize that, this is prototype of what to come. Very soon all religion will come together and agree officially that they serve the same God. Apostasy is one of the end time signs we are instruct to watch out for at this End of time. The lukewarm Protestants, orthodox and dead Pentecostal & charismatic churches have to go back to their vomit, their Harlot Mother, The Great Whore (Catholic) and form a one world religion with other religion all over the world. We can see all this forth coming, as shown in the examples above.

Let me add a quote from Kenneth Copeland’s when honoring Bishop Tony Palmer after his death.


"At 6:50 a.m., July 20, 2014, my dear and long-time friend, Bishop Tony Palmer, departed this earth and went home to be with Jesus, our LORD and Savior.
While he was on earth, his and Emi’s ministry and anointing became a bridge between Catholics and Protestants in the Body of Christ. Tony had a major impact on the worldwide Catholic Renewal. In that role, while ministering and teaching The WORD of faith in Argentina, he met and became very close friends with Cardinal Bergoglio. Their friendship grew stronger and stronger, until they were more than friends. They became spiritual father and son in The LORD. Cardinal Bergoglio went on to become Pope Francis.
In January of this year, Tony brought a personal video greeting from Pope Francis to all of us during our annual Ministers’ Conference in Fort Worth, Texas. There, Tony was being THE BRIDGE. It was a marvelous and very anointed moment in all our lives.
Tony then returned to Rome with a video (both videos on his cell phone) from us to the pope. Pope Francis responded with a personal invitation to me and seven others: James and Betty Robison, Dr. Geoff Tunnicliffe, Dr. Brian Stiller, Thomas Schirrmacher and John and Carol Arnott. We all, hosted by Tony, had one of the most anointed and wonderful experiences of our lives. THE BRIDGE WAS BUILT, and we stood on it together in the glorious presence of a very pleased LORD and Savior. His powerful and heaven-commanded prayer in John 17:21 is finally coming to pass the unity of the faith—not doctrines. Our doctrines differ. Our faith is in Jesus of Nazareth, Son of the living God!" 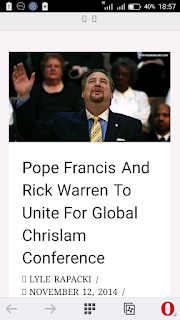 On Monday, November 17, 2014, Pope Francis hosted global ecumenical conference featuring Muslim leaders, pagans, and Rick Warren from Saddleback Church in California. The official website says that the Colloquium is sponsored by the Congregation for the Doctrine of… and co-sponsored by the Pontifical Council for the Family, the Pontifical Council for Inter-religious Dialogue , and the Pontifical Council for the Promotion of Christian Unity .
The conference held Nov. 17-19,  2014 at the Vatican, and feature more than 30 speakers from over 20 countries. According to the Catholic News Service, those of the Jewish, Islamic, Buddhist, Hindu, Jaina Shasana, Taoist and Sikh religions was present, as well as Roman Catholics and professing Christians. Note the high number of professing pagan religions that was represented.


Finally brethren, the coming One World Religion grows in strength, A one world religion which the Antichrist will take over has to be formed just before the Rapture. This will be the climax of the fallen away from true faith revealed in the scriptures. Many has fell away already but it shall reach its peak at the one world religion.
It is high time for a true son of God to come out of this dangerous Babylonian systems, lest they will share in their punishment. Tomorrow might be too late...
In every generation, there is always a selected few that Jesus Christ recognised as His Elect Bride. That's where you belong my dear sisters and brothers that want to go up in the Rapture. The Great Tribulation is inevitable and Armageddon is looming.

2 Thessalonians 2:3
[3]Let no man deceive you by any means: for that day shall not come, except there come a falling away first, and that man of sin be revealed, the son of perdition.

“And I heard another voice from heaven, saying, Come out of her, my people, that ye be not partakers of her sins, and that ye receive not of her plagues.” Revelation 18:4

DOMINALTI for CHRIST
On Behalf of End Time Hub!!!

at March 11, 2017
Email ThisBlogThis!Share to TwitterShare to FacebookShare to Pinterest