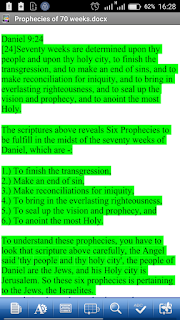 The Six Prophecies of the Seventy Weeks of Daniel

Daniel 9:24
[24]Seventy weeks are determined upon thy people and upon thy holy city, to finish the transgression, and to make an end of sins, and to make reconciliation for iniquity, and to bring in everlasting righteousness, and to seal up the vision and prophecy, and to anoint the most Holy.
The scriptures above reveals Six Prophecies to be fulfill in the midst of the seventy weeks of Daniel, which are -:

1.) To finish the transgression,
2.) Make an end of sin,
3.) Make reconciliations for iniquity,
4.) To bring in the everlasting righteousness,
5.) To seal up the vision and prophecy, and
6.) To anoint the most Holy.

To understand these prophecies, you have to look that scripture above carefully, the Angel said 'thy people and thy holy city', the people of Daniel are the Jews, and his Holy city is Jerusalem. So these six prophecies pertains to the Jews, the Israelites.
Now, let's take each prophecies one by one..

Number One: TO FINISH THE TRANSGRESSION

"To finish the transgression." What is a transgress? It's to go against something. Transgression means to go beyond the limit of what is morally or legally acceptable
(Rom 4:15).

Romans 11:25-27
[25]For I would not, brethren, that ye should be ignorant of this mystery, lest ye should be wise in your own conceits; that blindness in part is happened to Israel, until the fulness of the Gentiles be come in.
[26]And so all Israel shall be saved: as it is written, There shall come out of Sion the Deliverer, and shall turn away ungodliness from Jacob:
[27]For this is my covenant unto them, when I shall take away their sins.

Until God has finished with the Gentiles, Israel was blinded. They went off into sin and to transgressions against God, because God blinded their eyes that we might be grafted in. You get it?

God blinded them purposely for you and I. They cannot see, because God blinded them. And all Israel, true Israel, shall be saved. What did the Angel say?  "To finish the transgressions of Israel. I've confirm to you that there'll come a time when Israel's transgressions will be finished." God will cut off that wild branch and graft in back--that real branch again.

God in His mercy did that so we could be saved, blinded their eyes from their own Messiah, shut their ears up that they could not hear Him, yet looked right at His miracles and looked right at His miracles and things that He was doing.
Matthew said: "Though Jesus had done so many miracles, yet they could not believe." Because God said, "They got eyes and they can't see, and ears and they can't hear, unless they would see with their eyes and hear with their ears, and I would convert them." But so that we could have a chance, He pulled the curtain down over His own children's eyes, turned His own children away from the table, and turned them off that we might have a chance to live- giving us Life.

(26th verse again:) And so all Israel shall be saved: as it is written. There shall come out of Zion the Deliverer, and shall turn away ungodliness from Jacob:

Yes, He will come to Mount Zion one of these days. Upon the Mount of Olives, they'll recognize Him, and all of Israel will know it's Him. The Gentiles will be finished then. That branch that's been grafted in, God will take from it the fruit that's been gathered, and that wild branch will be grfted back.

Now, remember, He's not speaking of the Gentiles in this Seventy weeks, I'm just throwing this in here so you can see where we the Gentiles has our chance. But He will come to finish the transgression of the Israelites, make a finish of it.

Number Two: TO MAKE AN END OF SIN

Let's turn to St. Mattew 27. And here's where Israel made her fatal mistake. Here's where she done her last sin. And the reason that she's in the condition today.

Mattew 27:21 - 25
The governor answered and said unto them, Whether of the twain will ye that I release unto you? And they said, Barabbas... Pilate said unto them, What shall I do... with Jesus which is called Christ?... (Listen at them.)... They all said unto him, let him be crucified... (Now You remember Gabriel said, He'll be cut off not for Himself, not nothing He did.)... Let him be crucified.
And the governor said, Why, what evil has he done? But they cried out the more, saying, Let him be crucified.
Then Pilate saw that he could prevail nothing, but... rather a tumult was made, and he took water, and washed his hands before the multitude, saying, I am innocent of the blood of this just person: see... to it.
Here's their mistake; here's their sin.
Then answered... "the people, and said, His blood be on us, and on our children"

There's where they done it. He was making a end of sin for them. How could He do anything else but forgive them, knowing that He had to blind their eyes that we could come in. It's like His own children calling for His Blood. And they were blinded, and He knowed they were blinded. That's the reason He cried for forgiveness for them: "Forgive them, Father, for they don't know what they are doing." They were blind. For our sake they were made blind. In their unbelief they did this. But when they see Him again... He will Put an end to sin.

An unbeliever in  the Word of God, he is  a sinner and cannot enter the Kingdom  of Heaven. So the Israelites did not believe that was the Messiah. They could not see Him to be Messiah, yet He done every sign the Messiah was supposed to do. But they could not see it. They were blind.

But when Jesus comes again, when they see Him, it will make an end of their unbelief. Just like when the brothers of Joseph saw Him again, He make an end of their sin. Remember that they also was blind to see Joseph as their Messiah and sold Him to slavey (Genesis 44 and 45). So also the Jews was blind to see their brother, Carpenter son as the Messiah and sin by crucifying Him, but when He comes back at the end of the great tribulation, He will make an end for their sin.

11:27 For this is my covenant unto them, when I shall take away their sins.
11:28 As concerning the gospel, they are enemies for your sakes: but as touching the election, they are beloved for the father's sakes.
11:29 For the gifts and calling of God are without repentance.

To make reconciliations for iniquity. "Iniquity" is "doing wrong," as they did at the cross. He made reconciliations, but it will not be applied to them. It was not applied to them, why? Because they were blinded and could not see it. And why did they blind? You say, They were blind because God blinded them.  but most gentiles are blind because they are willfully blind, they don't want to come into the light. There's no reconciliation for unbeliever among the gentiles, the reconcilliation has been done by God Himself through the body of Christ 2017 years ago. "If you believe not I am He," said Jesus, "you'll die in your sins." "God was in Christ reconcilling the world to Himself.

So, this reconcialliation is for the Jews that kill their friend and brother because they were blind. Reconcialiation shall be make when Jesus comes after We the Bride has been raptured.

Zechariah 13:1,6
13:1 In that day there shall be a fountain opened to the house of David and to
the inhabitants of Jerusalem for sin and for uncleanness.
13:6 And one shall say unto him, What are these wounds in thine hands? Then
he shall answer, Those with which I was wounded in the house of my friends.

Let's turn to Isaiah the--Isaiah, the 66th chapter of Isaiah and read just for a moment and see what God says about Israel being saved, how long it will take to save Israel. Watch how quick it'll come. In Isaiah the 66th chapter and the 8th verse,

Isaiah 66:8
[8]Who hath heard such a thing? who hath seen such things? Shall the earth be made to bring forth in one day? or shall a nation be born at once? for as soon as Zion travailed, she brought forth her children.

In my next article I will explain the remaining three prophecies. From there we move on to the 70th week. All you need to do is stay Connected and refer more of your Christian friends to this blog.

DOMINALTI for CHRIST
On Behalf of End Time Hub!!!
at April 18, 2017
Email ThisBlogThis!Share to TwitterShare to FacebookShare to Pinterest