In my last teaching as regards this Daniel 70th week, I took time to outline the events to take place in this last week. Some of the events will be another series entirely, like the Rapture, Great Tribulation, The Bride Revival and the Marriage Supper of the Lamb. But, let me talk about the 7 years covenant and the abomination that maketh desolate.

In verse 27 of Daniel 9, it predicts that at the end of the age an evil prince will make a 7-year covenant with the Jews and Arabs! And in the middle of the week the anti-Christ breaks his covenant and interrupts the Temple worship!– In Rev. 11:2-3, two time periods are given. Verse 2 refers to the first half of the week, when worship starts once again in the Jewish Temple!– And the third verse refers to the last half of the week when the Temple is defiled! (II Thess. 2:4– Rev. 13:5) Then the abomination of desolation spoken of by Daniel the prophet is fulfilled! (Matt. 24:15-16) At this point there is just 3 ½ years left until Armageddon!

This last week 7 years is divided into two

A) The first three and the half years, after the covenant has been made for one week (i.e. seven years). The temple worship of the jews would be restored, the temple would have been built and the jews will start their temple worship back just like in the old testament. Almost at the end of this three and half years, the rapture will take place, the Bride (The immortal and incorruptible bride) will be raptured to meet Jesus in the air. The confederation of churches would have been formed.

B) The second three and half years which shall be the real kingdom of the Antichrist and The Greal Tribulation od the saints ( the foolish virgins). He will break His covenant and stop the temple worship, making himself God and anyone that will not worship him and the image of the beast will be persecuted and killed. During this second half, the Raptured Bride will be having the Marriage Super of the Lamb in heaven for three and half years.
Its during this second half that the mark of the beast shall be given, no one will be able buy, sell or even eat. The foolish virgins that missed the rapture will be persecuted to take the mark and deny Christ lest they will be tormented to death. This shall continue till consumnation i.e. the end of the age.

When ye therefore shall see the abomination of desolation, spoken of by Daniel the prophet, stand in the holy place, (whoso readeth, let him understand:)

As we can see, this verse demand understanding which come by the Revelation of the Holy Spirit, the question is what's the abomination of desolation?

I will take time to explain this in my concluding article on this series, from there we move on to the next topic.

But before I end this article, let me chip in a recent news related to this teaching, it's about the Temple Mount. 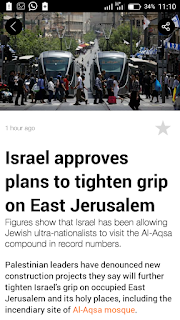 Palestinian leaders have denounced new construction projects they say will further tighten Israel's grip on occupied East Jerusalem and its holy places, including the incendiary site of Al-Aqsa mosque.

The most elaborate plan is for a cable car intended to bring thousands of visitors an hour to the Western Wall and its Jewish prayer plaza immediately below al-Haram al-Sharif, a compound containing Al-Aqsa and the golden-topped Dome of the Rock.

The $56m project was unveiled at a meeting of the Israeli cabinet in tunnels below the al-Haram al-Sharif. It is the first time the cabinet has met in Jerusalem's Old City, which Israel annexed in violation of international law.

Donald Trump, the US president, who visited East Jerusalem as part of a visit to the region late last month, has promised he will soon unveil the "ultimate deal" to end the Israeli-Palestinian conflict. Last Thursday he signed a waiver, delaying moving the US embassy to Jerusalem, on the grounds it would harm prospects for such a deal.

In addition to the cable car, Netanyahu's government announced a $14m lift and underground passageway to ease access for disabled and elderly people to the Western Wall, a retaining wall of the Al-Aqsa compound and a Jewish holy site.

Longer term, Israel hopes to build a subterranean station, connecting the site by express train from Tel Aviv. Netanyahu told his ministers the various projects would strengthen the Jewish people's connection to the city. 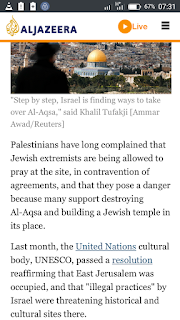 Palestinians have long complained that Jewish extremists are being allowed to pray at the site, in contravention of agreements, and that they pose a danger because many support destroying Al-Aqsa and building a Jewish temple in its place.

Last month, the United Nations cultural body, UNESCO, passed a resolution reaffirming that East Jerusalem was occupied, and that "illegal practices" by Israel were threatening historical and cultural sites there.

"Step by step, Israel is finding ways to take over Al-Aqsa," said Khalil Tufakji, a Palestinian geographer in Jerusalem and director of the Arab Studies Society's mapping department, which monitors settler activity.

He told Al Jazeera: "Israel is sending a message to the Palestinians and to Jordan [whose officials formally oversee the site] that 'Al-Aqsa is no longer yours. We can enter and we can do as we please there'."

The cable car, due for completion in four years, is supposed to transport some 3,000 visitors an hour from West Jerusalem to an entrance in the Old City walls next to Al-Aqsa. The cable car will pass directly over Palestinian homes in the East Jerusalem neighbourhood of Silwan. 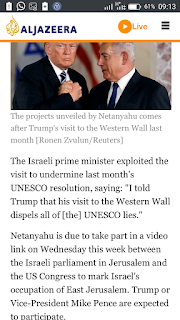 Yariv Levin, the tourism minister, called it "revolutionary project" that would serve as "an exceptional tourist attraction". Yonatan Mizrachi, who heads Emek Shaveh, a group of archaeologists that oppose the misuse of tourism and archaeology, warned that the cable car would also connect to a controversial tourism site in Silwan run by an Israeli settler organisation, Elad.

"This is yet another element in an Israeli policy of divorcing the Old City from its Palestinian hinterland, making it seem exclusively Jewish to visitors," he told Al Jazeera. "It is all about changing the Old City's character irreversibly."

The cable car project, initially championed by Jerusalem's mayor, Nir Barkat, was scrapped two years ago after the French firm due to construct it pulled out, following warnings from the French foreign ministry of the likely diplomatic fallout.

Israel's efforts to bring larger numbers of Jews into the Old City were highlighted last week with a new government-sponsored programme of ceremonies at the Western Wall.

A group of 300 students from the US, Britain and France became the first to "pledge allegiance to the Jewish people" at the spot, echoing a loyalty oath conducted at the Wall by newly drafted Israeli soldiers. At the ceremony, the students vowed to "forge a covenant with Jerusalem".

At the same cabinet meeting at which the cable car and lift were approved, noted Tufakji, plans were announced to apply budgetary pressures to Palestinian schools in East Jerusalem to force them to switch to the Israeli curriculum.

A master plan for 2050 (well, I'm sure Jesus is comely quickly, the Bride of Christ can not be here till 2050, Rapture would have taken place) includes building an airport, railway and increasing the connections between the Western Wall and the main Jewish settler colony in the Old City.

The projects unveiled by Netanyahu come in the wake of Trump's visit to the Western Wall late last month. Trump became the first sitting US president to enter occupied East Jerusalem.

On Monday, the US Senate voted 90-0 in favour of resolution celebrating what it termed the "reunification" the city's western and eastern sections in 1967.

So, as we can see, Prophecies is Fulfilling, one way or the other the Tribulation Temple has to be build, and the daily sacrifice. This news is to make us see how close it is for this agreement to be sign.

Dominalti for CHRIST,
On Behalf of End Time Hub!!!
at June 08, 2017
Email ThisBlogThis!Share to TwitterShare to FacebookShare to Pinterest