UNDERSTANDING WHAT THE ABOMINATION OF DESOLATION IS - Part 1 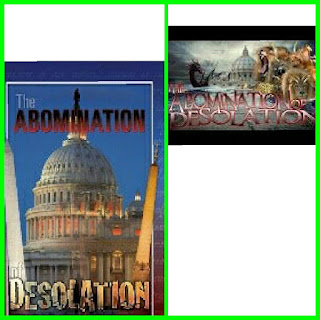 What is this “abomination”? Has it already come?—or is it yet to appear? How will we know it when we see it?

We are still in our series, The 70th week of Daniel. In our previous teachings I've explained almost all you need to know about the 70th week of Daniel as revealed in Daniel 9:27. What remain is the Abomination of Desolation,and that's what we will be looking into in today's teaching. I believe with this and one more teaching, I should complete the series of Seventy weeks of Daniel. We have to proceed to the next series, which is The Rapture but simultaneously I will be doing a prophetical analysis on the middle east, the crises in this region and prophecies fulfilling. So, let's go into today's topic...

Some Christians might have heard about the term “Abomination of Desolation,” but I'm sure only few know what it means. The Church have remained ignorant of the TRUTH of what the prophet Daniel called “the abomination that makes desolate.” They neither understand what this is nor the prophetic implications it carries. The blame goes to the Eli of our generation, but thank God we still have few Samuel around. This is a crucial topic that a holy seeker and loving enquirer need to understand.

The first important clue that Jesus gave about the abomination of desolation is found in Luke: “And when you shall see Jerusalem compassed with armies, then know that the desolation thereof is nigh [or near]” (21:20). Some mistakenly assuming the surrounding of Jerusalem by armies is the abomination.
When the verse describes the city being surrounded, it does not say the desolation “has happened,” but that it “is near.” If something is near, it has not happened yet. So, the abomination of desolation is NOT Jerusalem being surrounded by armies. These are separate events that occur at different times. Get this clear before continuing!

Matthew’s account reveals more about what to look for: “When you therefore shall see the abomination of desolation, spoken of by Daniel the prophet, stand in the holy place, (whoso reads let him understand:)…” (24:15).
This verse approaches the subject from a different and slightly later point in time than Luke 21, which describes the abomination just before its fulfillment.
We have clarified two points:
(1) armies around Jerusalem precede the abomination, and
(2) this prophecy involves something “stand[ing] in the holy place.”

Before reading further, recognize another aspect of the prophecy. In both Matthew and Mark, the instruction “…whoso reads, let him understand…” is found (Matt. 24:15; Mark 13:14). God inspires this to be recorded twice for special emphasis. God wants you to understand.

What exactly is this “holy place”?

The context in which the term is used makes plain that it is not figurative, but refers to a literal place—a religious site. Recognize, however, that this place cannot be a pagan religious site. It must be a location God considers or considered holy, with something foreign and blasphemous placed there. History and scriptures reveal that this must be the Jewish Temple (that is yet to be rebuilt) in Jerusalem.

A significant event for all of God’s people who are watching follows the abomination of desolation being set up. This reference is brought from Mark’s account: “…then let them that be in Judea flee to the mountains” (vs. 14).
The appearance of the abomination is the signal for God’s people to flee. This makes understanding the prophecy much more crucial.
Another reference to this fleeing is found in Luke’s account. Notice: “And when you shall see Jerusalem compassed with armies, then know that the deso­lation thereof is near. Then [what happens next] let them which are in Judea flee to the mountains; and let them which are in the midst of it depart out; and let not them that are in the countries enter thereinto. For these be the days of vengeance, that all things which are written [by the prophets] may be fulfilled. But woe unto them that are with child, and to them that give suck, in those days! For there shall be great distress in the land, and wrath upon this people [the modern nations of Israel]. And they shall fall by the edge of the sword, and shall be led away captive into all nations: and Jerusalem shall be trodden down of the Gentiles, until the times of the Gentiles be fulfilled” (21:20-24).

This duality is seen with the “abomination of desolation” prophecy. And what it reveals is fascinating!
Let’s examine the historical TYPE of what has already occurred.
First, recall the lengthy Daniel 11 prophecy. A crucial part of that prophecy comes up for review and expansion at this juncture.
In about 176 BC, Antiochus IV (king of the north, and TYPE of the future final civil ruler who embodies the Beast system) acquired the kingdom from his older brother. After this, Antiochus Epiphanes removed the high priest in Jerusalem and installed some­one loyal to himself. Upon a triumphant return from Egypt, in 168 BC, Antiochus sacked the Temple at Jerusalem and took its golden vessels.
Recall that Antiochus also sent troops to Judea in 167 BC. They destroyed the Temple and its sanctuary. This act stopped the commanded twice daily sacrifices at the Temple (Ex. 29:39-42; Num. 28:4-6). This was an overt attempt to wipe out the Jewish religion with all of its doctrines.
This military leader also stationed a garrison atop the Jewish Temple Mount, desecrating it. Also recall that Daniel wrote, “Yes, he magnified himself even to the prince of the host, and by him [Antiochus] the daily sacrifice was taken away, and the place of [the] sanctuary was cast down” (8:11).
Daniel added this in chapter 11: “And arms shall stand on his [Antiochus’] part, and they shall pollute the sanctuary of strength [the Jewish Temple], and shall take away the daily sacrifice, and they shall place the abomination that makes desolate” (vs. 31).

What exactly is this coming “abomination” that will be “set up” again?

The truth—born of history—is beyond eye-opening in regard to prophecy.
The first fulfillment was not just Antiochus’ armies coming into Jerusalem—an early “treading it down” for three years until 165 BC—but the fact that those armies set up an IMAGE—a specific IDOL—on the Temple’s altar, which defiled and made it desolate. Antiochus further polluted the Temple by offering swine’s blood upon the altar.
These historical events of Daniel 8 are an unmistakable fulfillment of the prophecy in Daniel 11:31, and a FORERUNNER of the end-time fulfillment of the “abomination of desolation” spoken of by Christ in Matthew, Mark and Luke.

What was this statue and where is it now?

Incredible History Unveiled, You have almost certainly never heard it. History reveals that the idol Antiochus placed in the Temple—or “holy place”—was a statue of Zeus or Jupiter Olympus, the chief deity of pagan Hellenists of Greece and Macedonia.
Volume Four of A Dictionary of Christian Biography, Literature, Sects and Doctrines makes this clear. The context has to do with Simon (Magus) the sorcerer, described in Acts 8: “When Justin Martyr wrote [AD 152] his Apology [his book] the sect of the Simonians [from Simon Magus] appears to have been formidable, for he speaks four times of their founder, Simon [Magus]…and we need not doubt that he identified him with the Simon of the [book of] Acts. He states that he was a Samaritan [Acts 8 makes that clear], adding that his birthplace was a village called Gitta; he describes him as a formidable magician, and tells that he came to Rome in the days of Claudius Caesar [which is AD 45], and made such an impression by his magical powers, that he was honoured as a god, a statue being erected to him on the Tiber [River], between the two bridges, bearing the inscription ‘Simoni deo Sancto’” (p. 682). This inscription means “Holy God Simon.” Also note that Simon’s followers generally called him Jupiter.

Is this the very same statue placed by Antiochus?

It has been well reported that many centuries ago a statue of the pagan god Jupiter was found in Rome. The large bronze statue was altered and renamed St. Peter. One strong indication of this comes from John Parker: “By some writers, it is affirmed to be no other than the statue of Jupiter, with a new head and hands; others stating that this famous statue was melted down by order of Pope Leo I in the middle of the fifth century, and recast into this figure of S. Peter, holding the keys of heaven with one hand, whilst the other is raised in the act of benediction in the Roman manner, with the first and second and fingers extended” (The Archaeology of Rome, p. 38).
Ralph Woodrow, author of Babylon Mystery Religion, goes further: “This statue is looked upon with most profound veneration and its foot has been kissed so many times [by devotees] that the toes are nearly worn away!” (It is more than interesting to note that the Catholic religion has a long tradition of kissing idols—feet, rings and crosses—yet the pagan origin of this practice can clearly be found in I Kings 19:18 and Hosea 13:1-2.)

Incredible! Yet these are the facts from history. This same statue—directly related to the abomination of desolation—is now prominently displayed in Rome!
Remember, Jesus said His servants—those who understand God’s prophecies and know what to watch for—shall “see” the abomination of desolation. This must be referring to something that is physically set up and visible in the holy place.
Will this statue be brought back, full-circle, to Jerusalem to fulfill this end-time prophecy? God, through the initial fulfillment, has almost certainly provided the answer for those willing to believe His Word and plain accounts of history regarding the role of this image and its connection to the end-time civil ruler (Beast), and the religious leader (False Prophet) who will direct that it be placed—with himself—in Jerusalem.

A United Europe will transform the crashing global economy and usher in a short time of world prosperity unlike any previous time. The Antichrist will proclaim himself to be God. Amazingly, hundreds of millions will believe him, having been seduced by accompanying miracles. The world will rejoice and also worship the Beast because he will bring peace and prosperity back to the world.

Ezekiel, 28:5-8 describe more of this religious leader’s pride in the context of what his end will be: “By your great wisdom and traffick have you increased your riches, and your heart is lifted up because of your riches: therefore thus says the Lord GOD; because you have set your heart as the heart of God; behold, therefore I will bring strangers upon you…they shall bring you down to the pit.”
Antiochus Epiphanes was a forerunning TYPE of this last world leader to come.

All these we shall see in our next teachings... Including what the Latter Rain Prophet, Neal Frisby revealed about the Abomination of Desolation.

Dominalti for CHRIST
On Behalf of End Time Hub!!!
at June 21, 2017
Email ThisBlogThis!Share to TwitterShare to FacebookShare to Pinterest