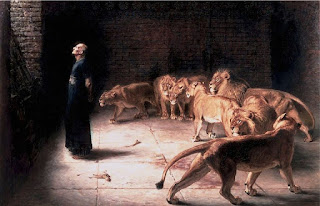 Once again, these events are listed below with a slight correction from the previous article

The First Event: JERUSALEM WILL BE RESTORED AND BUILT AGAIN

Now, Dan 10:13 reveals how God interfere and influence the thought of three Kings to the favour of the Israelites. Daniel discovered the prophecy of  Jeremiah when it remain 3 years to the end of their captivity in Babylon. Jeremiah had prophesied that Israelites will spent 70 years in Babylon under captivity (Read Jeremiah 25:8-11 and Dan 9:1-2). So, three years to the end of the Seventy years, Daniel discovered the prophecy and intercede on Behalf of himself and his people. So, Gabriel was sent to to stir up the spirit of the three Kings that shall come to the favour of Israel in order for them to come out of Babylon and also for the prophecy to come to pass, proofing the faithfulness of God.
Even though the spirit prince of Persia, the evil spirit in charge of the Kingdom of Persia hindered Gabriel from carrying out God's commandment in the spirit of these three Kings, but Michael the Archangel came to his rescue, that was when Gabriel put it in the spirit of the Kings to come to work for the favour of the Israelites in order to come out of Babylon after 70 years and help them in supplying everything needed for the building of the wall of Jerusalem, restoring and building the city of Jerusalem.
Read and meditate on the scriptures below

Daniel 10:13
[13]But the prince of the kingdom of Persia withstood me one and twenty days: but, lo, Michael, one of the chief princes, came to help me; and I remained there with the kings of Persia.


[1]Also I (Gabriel) in the first year of Darius the Mede, even I (Gabriel, he has been speaking to Daniel since chapter 10) stood to confirm and to strengthen him.

Now, the first event is the restoration and building of Jerusalem spoken about in Daniel 9:25 which took place in Ezra 1:1-8


also in writing, saying,
1:2 Thus saith Cyrus king of Persia, The LORD God of heaven hath given me all the kingdoms of the earth; and he hath charged me to build him an house at Jerusalem, which is in Judah.
1:3 Who is there among you of all his people? his God be with him, and let him go up to Jerusalem, which is in Judah, and build the house of the LORD God of Israel, (he is the God,) which is in Jerusalem.
1:4 And whosoever remaineth in any place where he sojourneth, let the men of his place help him with silver, and with gold, and with goods, and with beasts, beside the freewill offering for the house of God that is in Jerusalem.
1:5 Then rose up the chief of the fathers of Judah and Benjamin, and the priests, and the Levites, with all them whose spirit God had raised, to go up to build the house of the LORD which is in Jerusalem.
1:6 And all they that were about them strengthened their hands with vessels of silver, with gold, with goods, and with beasts, and with precious things,beside all that was willingly offered.
1:7 Also Cyrus the king brought forth the vessels of the house of the LORD, which Nebuchadnezzar had brought forth out of Jerusalem, and had put them in the house of his gods;
1:8 Even those did Cyrus king of Persia bring forth by the hand of Mithredath the treasurer, and numbered them unto Sheshbazzar, the prince of Judah.

Zerubabel and Joshua restored the temple and it was completed in 516 BC but they did not build the wall of Jerusalem.


6:15 And this house was finished on the third day of the month Adar, which was in the sixth year of the reign of Darius the king.
6:16 And the children of Israel, the priests, and the Levites, and the rest of the children of the captivity, kept the dedication of this house of God with joy.
6:17 And offered at the dedication of this house of God an hundred bullocks, two hundred rams, four hundred lambs; and for a sin offering for all Israel, twelve he goats, according to the number of the tribes of Israel.
6:18 And they set the priests in their divisions dry, and the Levites in their courses, for the service of God, which is at Jerusalem; as it is written in the book of Moses.

Nehemiah led the building of the wall. He left Babylon for Jerusalem in 445BC for the restoration and building of Jerusalem.

This first event took 7 weeks which is equal to 49 years.

The Second Event: THE COMING AND CUTTING OFF OF THE MESSIAH-JESUS CHRIST

God manifested in the flesh in the body of Jesus Christ to fully and totally redeem man back to Himself.  He did not just come and die to redeem only your spirit but your spirit, soul and body. He want to restore man back to His Image and Likeness He created them from the beginning. The way Adam was before the fall.

Colossians 1:27
[27]To whom God would make known what is the riches of the glory of this mystery among the Gentiles; which is Christ in you (in your spirit, soul and body), the hope of glory (glorification).


[23]And not only they, but ourselves also, which have the firstfruits of the Spirit, even we ourselves groan within ourselves, waiting for the adoption, to wit, the redemption of our body.

Now, just before the Rapture, the bodies of the Wise virgins and the midnight criers that shall go up in the Rapture shall be change into the Likeness of His own body and we shall see him face to face up in the air. Until the body is redeem then the mission of God in the flesh is not complete. But there are what to do to receive this full and Total redemption, that's a topic for another day.

1 John 3:2
[2]Beloved, now are we the sons of God, and it doth not yet appear what we shall be: but we know that, when he shall appear, we shall be like him; for we shall see him as he is.


[50]Now this I say, brethren, that flesh and blood cannot inherit the kingdom of God; neither doth corruption inherit incorruption.
[51]Behold, I shew you a mystery; We shall not all sleep, but we shall all be changed,
[52]In a moment, in the twinkling of an eye, at the last trump: for the trumpet shall sound, and the dead shall be raised incorruptible, and we shall be changed.
[53]For this corruptible must put on incorruption, and this mortal must put on immortality.


[25]For I would not, brethren, that ye should be ignorant of this mystery, lest ye should be wise in your own conceits; that blindness in part is happened to Israel, until the fulness of the Gentiles be come in.
[26]And so all Israel shall be saved: as it is written, There shall come out of Sion the Deliverer, and shall turn away ungodliness from Jacob:

This Jesus Christ was rejected, persecuted and crucified by the Jews, His brothers because they were blind. This has to happen, in order for him to die for the sin of men, and also to come and seek out a wife out of the Gentile nations.

Christ was rejected, crucified  and cut off 30 AD, and this is the second event of the Seventy Weeks of Daniel.

But He rose up again and He is alive for eternity. He is coming back very soon for His Elect Bride

The Third Event: DESTRUCTION OF JERUSALEM AND THE TEMPLE

21:20 And when ye shall see Jerusalem compassed with armies, then know that the desolation thereof is nigh.


21:22 For these be the days of vengeance, that all things which are written may be fulfilled.
21:23 But woe unto them that are with child, and to them that give suck, in those days! for there shall be great distress in the land, and wrath upon this people.
21:24 And they shall fall by the edge of the sword, and shall be led away captive into all nations: and Jerusalem shall be trodden down of the Gentiles, until the times of the Gentiles be fulfilled.

The Fourth, fifth and sixth event will be explain in our next article.

DOMINALTI for CHRIST,
On Behalf of End Time Hub!!!
at March 30, 2017
Email ThisBlogThis!Share to TwitterShare to FacebookShare to Pinterest