END TIME NEWSLETTER FOR THE MONTH OF APRIL 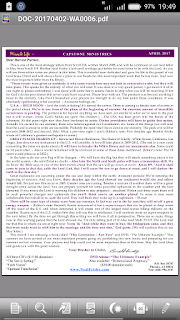 Oh my my, what an awesome God... www.endtimehub.blogspot.com is 6 months old today, we thank the Lord for Everything... In the mood of celebration of impact and influence, this blog has made in the life of elect Bride world wide in just six months, I will like to quote the whole April 2017 Newsletter from nealfrisby.com, you can download the image above, for the full newsletter. After this I will upload screen shots of End Time News in the last one week.. Then do a full teaching and analysis about the Significance of the Al-Sadr Mosque, Dome of Rock and Temple Mount in this End of Time.

"This is one of the most strategic letters from Scroll 318, written March 2005, and will be continued on our next letter in May from Scroll 319. Brother Neal Frisby’s last scroll writings just before he went home to be with the Lord. As you will see three editor notes are placed in this letter. This wonderful man dedicated and gave his life to the gospel of our Lord Jesus Christ and will always have a place in our hearts for this most important work that he has done. And now the most important letter from his library.
“These events were given so suddenly is why some events here may not look in consecutive order, but they will take place. This speaks for the entirety of what you will read. It was done in a very quick period. I got most of it all in one night so please understand. I was faced with some heavy satanic forces to stop what you will be receiving. If not for God’s divine providence this never could have occurred. Please bear with me. The pressure was beyond anything I faced in the ministry. Like Paul I beseeched your prayers for strength to do my best under these conditions. It was absolutely spellbinding what occurred.–Awesome feelings, etc.”

U.S.A.–HIGH NOON– And the clock is ticking! It’s turned the corner. There is coming a climatic turn of events in the period ahead. We’re in one form of the phase of the beginning of sorrows. An awesome amount of incredible occurrences is pending. The portent is far beyond anything we have seen yet similar to what we’ve seen in the past but it will worsen. (Note: God’s hands are upon His children.)–The USA has been given into the hands of the schemers. At this point right now they have bankrupt its assets. Divine providence will have to guide this nation. Actually it’s owned by our enemies; those who believe against our Constitution, etc. Some of the things you will read that the Lord is about to write are incredible. Probably the most vital I have done in my ministry. The peak of it will hit towards 2008-2012 and beyond. (My! What a pre-view sight I saw!) (Editor’s note: Five decades ago Brother Frisby wrote of California’s greatest earthquake to come.)

GREAT PLACES SHAKEN UP – Renowned Mount Rushmore, The Statue of Liberty, White House, California, Las Vegas. Just about every monument in the U.S. will crumble. A lot will take place in 2009-2012. (The rest in a new cycle concerning the dates we spoke about.) It will have to forsake the White House and our monuments also. Some could be 10 years after.–Also a world turnabout will be involved in some of these dates mentioned. (Editor’s note: The 10 years would place us at 2022.)
In the later cycle our own flag will be changed.–We will have the flag but they will attach something above it for the world system–the anti-Christ no doubt.– Also later the North and South poles will have a tremendous shift. We do know the Bible says in one of the later events ahead that the sun will go down at noon. Amos 8:9, “And it shall come to pass in that day, saith the Lord God, that I will cause the sun to go down at noon, and I will darken the earth in the clear day.”

Great explosions are occurring under the sea and deep within the earth. Awesome periods! We’re entering the beginning of sorrows. And you know, three decades ago the Lord showed me continents would rise and others would fall. We just saw this occur in 2005. Greater ones are coming. Besides a mixture of weather there will be a great drought come across the land. You can prepare yourself for some powerful upheavals in the weather and the four elements. If you notice the Lord is warning His children to stay prepared–steadfast! Within just three years there will be such powerful changes and upheavals that you’ll think you’re on another planet! To some it may seem unbelievable but it shall be so, saith the Lord. They will think they woke up in a nightmare.–Worse!
There will be some type of atomic scare from our enemies. In fact way out in the far seas they will set off a great energy weapon. –(Editor’s note: Recently Russia announced it has a super weapon that can be placed in deep water off the coast of the U.S. and when detonated it will create one of the largest tidal waves killing millions on the coastline. Russia says if the U.S. strikes first they will use this in retaliation. I will continue more on super weapons in the next letter.) By the time we get through this writing we will have it all in perspective. There are so many things now in this warning period that the Lord showed me. I’m only telling part of it! Also read Matt. 25:1-9. The Lord told me that this is where we are at right now: Verse 10, “And while they went to buy, the bridegroom came; and they that were ready went in with him to the marriage: and the door was shut.” End quote. (We will continue this on our May letter.)
For those interested in more of Neal Frisby Writtings, simply log on to www.nealfrisby.com and Library.

Finally, always remember end time hub team in your prayers...
And we will like to know how much this blog has added to you Spiritually in accordance with making you ready for the Rapture... Simply make your comments, complain, opinion, suggestion and contributions in the comment box.

For all our topics that have been taught in the past six months, simply read them here...
(Previous Topics Taught on End Time Hub)

DOMINALTI for CHRIST,
On Behalf of End Time Hub!!!
at April 02, 2017
Email ThisBlogThis!Share to TwitterShare to FacebookShare to Pinterest